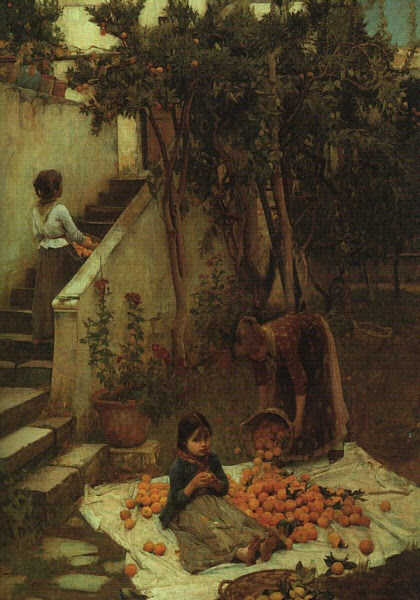 John William Waterhouse (April 6, 1849 – February 10, 1917) was a British Pre-Raphaelite painter most famous for his paintings of female characters from mythology and literature. He belonged to the later phase of the Pre-Raphaelite Brotherhood.

In 1874, at the age of twenty-five, Waterhouse submitted the classical allegory Sleep and His Half-Brother Death to the Royal Academy's Summer Exhibition. The painting was very well received and he exhibited at the RA almost every year afterwards until his death in 1917. In 1883 he married Esther Kenworthy, the daughter of an art schoolmaster from Ealing who had exhibited her own flower-paintings at the Royal Academy and elsewhere. They had two children, but both died in childhood.

In 1895 Waterhouse was elected to the status of full Academician. He taught at the St. John's Wood Art School, joined the St John's Wood Arts Club, and served on the Royal Academy Council.
One of Waterhouse's most famous paintings is The Lady of Shalott, a study of Elaine of Astolat, who dies of grief when Lancelot will not love her. He actually painted three different versions of this character, in 1888, 1896, and 1916.

Another of Waterhouse's favorite subjects was Ophelia; the most famous of his paintings of Ophelia depicts her just before her death, putting flowers in her hair as she sits on a tree branch leaning over a lake. Like The Lady of Shalott and other Waterhouse paintings, it deals with a woman dying in or near water. He also may have been inspired by paintings of Ophelia by Dante Gabriel Rossetti and Millais. He submitted his Ophelia painting of 1888 in order to receive his diploma from the Royal Academy. (He had originally wanted to submit a painting titled "A Mermaid", but it was not completed in time.) After this, the painting was lost until the 20th century, and is now displayed in the collection of Lord Lloyd-Webber. Waterhouse would paint Ophelia again in 1894 and 1909 or 1910, and planned another painting in the series, called "Ophelia in the Churchyard."

Waterhouse could not finish the series of Ophelia paintings because he was gravely ill with cancer by 1915. He died two years later, and his grave can be found at Kensal Green Cemetery in London. -- Wikipedia
Posted by Athos at 8:58 AM