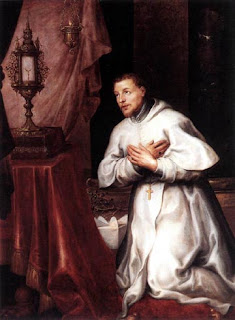 Norbert became archbishop of Magdeburg in central Germany, a territory half pagan and half Christian. In this position he zealously and courageously continued his work for the Church until his death on June 6, 1134.

On the occasion of his ordination to the priesthood, Norbert said,

As most of Europe withers away in indifference to the Christian Word, we pray that Pope Benedict XVI is able to turn the tide in Germany. Read about a saint who, in a distant past, did so much in converting the hearts and souls of Germany.

A different world cannot be built by indifferent people. The same is true in regard to the Church. Sad to say, the so-called updating of the Church has not engendered the different Church which was so devoutly and hopefully envisioned by Vatican Council II. A principal reason for this failure was—and is—the indifference of vast numbers of nominal faithful, their indifference to ecclesiastical authority and essential doctrines of the faith. Unswerving loyalty to the Church and fervent devotion to the Eucharist, as practiced by Norbert, will continue immeasurably towards maintaining the people of God in accord with the heart of Christ.

Posted by David Nybakke at 9:19 AM

Magnificent reflection, Aramis. Thank you. I was just now (over lunch) reading an essay by Peter Milward, SJ in Saint Austin Review entitled, "Being and Non-Being in Shakespeare."

...Shakespeare dares to put into the mouth of his heroine Cordelia the twofold affirmation, "And so I am, I am!" -- as it were echoing the very name of God revealed to Moses. On the other hand, lest pride go before a fall, as in the case of the fallen angels, it belongs to the virtue of humility in man to confess that he might not have been, that even in his inmost being lurks the possibility of non-being.

A principal reason for this failure was—and is—the indifference of vast numbers of nominal faithful, their indifference to ecclesiastical authority and essential doctrines of the faith.

Do you think, Aramis, that this "indifference" is due to the sheer number of distractions in a culture that has turned its back on the true transcedence of the Gospel? That is, given away its birthright, Christendom has gone "looking for 'love' in all the wrong places?"

People will have their religion one way or another: if not the deposit of faith in the perfect revelation of God in Jesus Christ, then in gutter forms of religion via the primitive sacred?

Ath, I think it goes deeper than that... Virginia Woolf "The Wave": But for ourselves, we resent teachers. Let a man get up and say, “Behold, this is the truth,” and instantly I perceive a sandy cat filching a piece of fish in the background. Look, you have forgotten the cat, I say. So Neville, at school, in the dim chapel, raged at the sight of the doctor’s crucifix. I, who am always distracted, whether by a cat or by a bee buzzing round the bouquet that Lady Hampden keeps so diligently pressed to her nose, at once make up a story and so obliterate the angles of the crucifix. I have made up thousands of stories; I have filled innumerable notebooks with phrases to be used when I have found the true story, the one story to which all these phrases refer. But I have never yet found that story. And I begin to ask, Are there stories?

I was too hasty in pushing the "publish your comment" button. Our symptom is that we have fallen under the “victory of Pilate” when he asked “What is truth?” And anyway, who has time for that question? Pilate must have ended many a great party asking questions like that.

Our symptom is that we have fallen under the “victory of Pilate” when he asked “What is truth?” And anyway, who has time for that question?

That is my point: who shouldn't make time for that question? The allure of the "bright, shiny object" being dangled in front of everyone's face by the market, by television (wait, that's the same thing), by the internet (except this blog, of course) is what perpetuates the "attention deficit disorder" of human life today.

We are simply programmed to look at the consumable objects of desire and stop far short of asking the BIG questions of human life. The distractions keep us from asking about mortality, eternity, our purpose (why we're here in the first place), and reality of "mattering".

The imago dei and all that that should mean to us is ignored for trinkets, baubles, mindless and meaningless "stories", and joining ourselves to the metanarrative of salvation history.

add: ... is ignored, trampled upon, or scorned.