Athos' post Fearsome, Faithful Living + stirred in me a response that turned into something more than a mere comment - so I decided to post it here.

Dear Ath, beware that you and Monk do not fall into some kind of model/rival scandal. Pondering this post left me thinking about 3 great remarks from 3 great teachers: 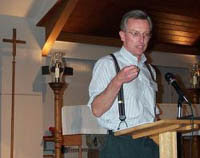 1) Gil Bailie's comment from The Truth of the Cross tape, "The Gospel is like the Supreme Court. Let’s say that you are going to do something that is going to cost you many millions of dollars; however you are a little anxious that it is somehow against the law, or it might be unconstitutional. You go to the Supreme Court and say that we are going to do this and it is very expensive, is that unconstitutional? The Supreme Court will tell you that they cannot tell you because we cannot give advisory opinions. So they say, go spend your millions and if someone sues you, come back in and then we will tell you. The Gospel is the same way. It answers no idle questions. It answers no questions that are asked for merely curiosity sake. But it does answer questions that arise with urgency, and new questions always arise. When we are moved due to historical situations, because of existential situations, go to the Gospel and ask it, ask the Christ Gospel, to answer our needs, it will answer us, but we will have to come to it with that kind of need." and 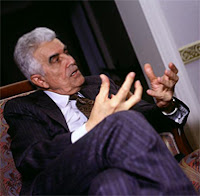 2A) Model-Rival. Strictly speaking, if a model is a person in our immediate life setting (parent, authority figure, peer), then he or she is always potentially a rival. Likewise, a rival in this same immediate setting is always basically a model, although this may not be apparent to the subject. The model-rival is associated with an object of desire which the subject wants to obtain, but the important thing is not as much the object as the defeat of the model-rival. Continually putting oneself in situations of rivalry may be exhilarating if one is winning, but losing may lead to extreme depression. The situation becomes a crisis if the person is entrapped in a model-obstacle relationship.

2B) Model-Obstacle. The model-obstacle is someone or something over whom the subject cannot win, or in some cases it would be accurate to say that the subject will not allow himself to defeat the model/obstacle, for to achieve that would be to lose the model. All sorts of self-defeating behavior, including addictions (so well described in Dostoyevsky's writings), stem from this predicament. From the standpoint of the mimetic theory, it can only be understood in terms of the mimetic, interdividual character of human existence. The person in this predicament could be described as stumbling over or being blocked by the skandalon. The skandalon of the Gospels is a an obstacle or stumblingblock (the older meaning of "scandal" in English and French, from the Latin and Greek). The skandalon is associated with Satan. This is seen particularly, e.g., in the Gospel of Matthew. Jesus has spoken of his suffering, death, and resurrection, and Peter rebukes him for saying he will suffer and die. Jesus in turn rebukes Peter: "Get behind me, Satan! You are a skandalon to me... " (Matt. 16:23). That is, "you are a scandal, an obstacle, a hindrance to me." Here Satan, usually named as the personification of the mimetic model-obstacle, is "deconstructed" or "demythologized" in that Jesus uses the name to express the mimetic rivalry that obsesses Peter. Peter wants to identify himself with a worldly winner and in anger he begins telling his master what he can and cannot do. Something quite similar is reported concerning James and John, who ask to be Jesus's chief lieutenants when he comes into his glory (Mark 10:35-45; Matt. 20:20-28).
The preceding is taken from "The Girard Reader," edited by James G. Williams.

and 3) being a follower of the Franciscan way; once Brother Leo asked Francis what perfect joy is? Francis related that if, they, when wet, cold, and muddy, knocked on a convent door, and the porter refused to let them in but drove them away like a couple of thieves, beating them with clubs until they nearly died, "and if we endure all this so patiently, and think of the sufferings of Christ, the All-praised One, and of how much we ought to suffer for the sake of our love of him - O Brother Leo, mark thou, that in this is perfect joy."

Question: Prior to the Protestant rebellion would such wonderings (such as what constitutes legitimate "security" that you and Monk tossed around) have even entered the minds of anyone?
Posted by David Nybakke at 5:05 PM

Question: Prior to the Protestant rebellion would such wonderings (such as what constitutes legitimate "security" that you and Monk tossed around) have even entered the minds of anyone?

Thanks for the warning to Monk and myself, Aramis. Was that a set-up for the rest of your post? Your question (above) is a good one, but I struggle to connect the dots, figuring out what it means.

My post was a reflection on how to deal with one's feelings toward enemies, perceived and/or real, not a rivalrous counterpoint - though your post may be one to mine, come to think of it.

But your question (above) is a good one. Legitimate defense was probably less questioned prior to the Protestant reformation than today, when the gospel has made us question very thoroughly our motives, victimization, and the use of violence generally.

Or, didn't you mean it that way?

I think my initial comment reminds me that one part of growing in Catholic understanding, is letting go of Evangelical misunderstanding. I have been diligent about learning my new faith, but remiss at not unlearning some of the more simplistic views I adapted as a Protestant.

Either/or y'all are some smart fellas!

PS, where'd ya get that awesome last image?

First things last: Where did I get that awesome last image?


There is absolutely NO warning intent - you guys were set up, by me, to lead into Girard concepts. Sorry that either of you mistook what is my poor judgment.

I was simply taking what you had written Ath and added some ponderings -- the notion of "self" defense disturbs me a bit, and legit "self" defense even more. I am NOT wanting to get into argument with Church teaching, however I think that we go back to basic concerning our makeup - our mimetic nature and explore how we can easily find ourselves caught in these traps. So often people hear the "forgive your enemy" and so many of these people are perplexed at the notion that the enemy is often the "self" - the "self" of culture bred in us all. How do we help one another see this Girardian concept of self so we can better handle issues before they escalate into violence?

I love the Church teachings and I have come to appreciate it more as I have applied MT and the teaching of Girard and Bailie to my understanding of it. That is about all I was doing in this post.

There's a great line in Out of Africa. Meryl Streep's character is confronted by a lioness, and Robt. Redford's character, behind and unbeknownst to her is watching this drama unfold, says just as she is ready to bolt, "Don't run."

"Don't run," Redford says. "Lions are a lot like people. They want to see if you'll run."

Bullies, like terrorists and other pathologically disturbed folk ("bent" in Lewis's Out of the Silent Planet) want to see if you will run or hold your ground. The latter helps the former know something they didn't know already about themselves.

Christians, ipso facto, fear their own anger, violence, etc. But the Church in her wisdom faces reality in understanding and promoting "legitimate defense" - defending those who cannot defend themselves.

Bullies, "aborters" (is that a word?), terrorists, in MT parlance are wannabee priests of the primitive sacred. Legitimate defenders are merely those who choose to defend the defenseless.

(Yeah, I feel some heat here on the subject, but not "righteously" so - I'd do the same for the victimizers if they were maltreated.) Cheers!