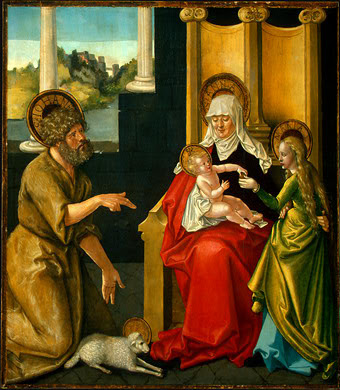 Saint Anne with the Christ Child, the Virgin, and Saint John the Baptist
Hans Baldung Grien - 1511
On this Solemnity of the Nativity of Saint John the Baptist (the Church only celebrates three births on her liturgical calendar -- guess the other two), I want to make mention of an interesting place if you ever make your way to the Holy Land on pilgrimage. It is a place that (a) may be the historical site of Emmaus, (b) is the site of a magnificent Crusader church similar to that of St. Ann's Church in Jerusalem, and (c) bears the name, alternatively, of St. John the Baptist and the Church of the Resurrection, commemorating the birth of the former and the post-resurrection appearance of Our Lord at Emmaus of the latter. The frescoes in the nave were being restored when I visited in 2001. Also, a chamber music festival takes place there utilizing its magnificent acoustics each year.

This Crusader church at Abu Gosh, Israel also bears the dubious honor of being the setting for a climactic scene in The Dionysus Mandate. Here is a brief excerpt:

He backed Aly down the steps to the grotto holding her arm in one hand and the pistol in the other. Aly recognized the mistake Neesam was making in the darkness as he walked them closer and closer to the edge of the deep, spring-fed baptism pool. She did nothing to warn Neesam or slow their progress. They stepped off and splashed simultaneously into the baptismal’s shockingly cold waters.

Aly had a split second to gulp a deep breath before going under. She felt herself going down in the dark waters with her hands tightly bound in the small of her back. Neesam disappeared. She thought, He’s up and back to the surface already. I can’t swim and I can’t breathe. And I can’t get my hands free.

But Lucent Neesam, though a naturally gifted swimmer, at that moment found himself slowly yet inexorably moved under an ancient stone archway once stood upon by chaplains to the Crusaders. His head struck solid rock when he tried to surface making him wince. All right, son of a buggering b**ch, he told himself. Let’s get out of this infernal puddle. He twisted, sweeping a hand through the further reaches of the baptismal pool. His lungs burned, and he lurched in the direction, he thought, of the opening beyond the massive walls of the Crusader church ...

May the good saint forgive any exploitation the author of The Dionysus Mandate may have perpetrated by using the church commemorating his birthplace. Did Neesam and/or Aly get out of the baptismal pool's dark and dangerous waters? Ah, well ...
Posted by Athos at 7:53 PM

1. Yes, John, Jesus' cousin, is inexplicably decades older than the Christ Child in the painting by Grien. Go ask him why