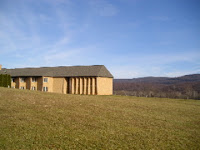 [Guesthouse - Holy Cross Abbey] Once every so often, I feel the need to make a silent retreat. Coming from a rather low church evangelical background (first the E. U. B. Church, then United Methodist), the very word "retreat" sounded like a failure of nerve, a backward movement in the face of an advancing enemy, a lack of resolve. It took a special go-between establishment called the Church of the Saviour and one of its mission fellowships, The Potter’s House, and its one-time spiritual director (1973-1976), Conrad Hoover, to show me otherwise.

A spiritual retreat is anything but a "backward movement." Yet another member of The Church of the Saviour, author Elizabeth O’Connor, wrote magnificently that as always Our Lord modeled the way we need to continue to carry out his ministry of reconciliation; namely, in a rhythm of active ministry and pulling back in prayer, contemplation, and reflection. This rhythm, the "journey inward and journey outward" keeps us from burn out, on the one hand, and navel-gazing, on the other.

At the same time that I was engaged in spiritual direction with Conrad, I was attending a monthly ecumenical book study led by two monks at Holy Cross Abbey, Berryville, Virginia, at the invitation of a fellow United Methodist pastor. In that monthly group of pastors and religious, we read the works of great Christian spiritual writers, among which were the works of Thomas Merton.

"Hmm," I thought, "this is a funny thing. Merton was a Cistercian. This Abbey is Cistercian. Ms. O'Connor and Conrad are recommending this 'retreat' notion and a 'journey inward, journey outward.' Means nothing to my background as a Protestant Christian. Maybe it's worth a try."

And so began a pattern in my life of going on retreat, nearly always at Holy Cross Abbey, for the past 27 years. And I highly recommend it to you, gentle reader.
Posted by Athos at 5:46 AM

Thanks for this, as on my weekend "to do" list was to research retreats. I still have never gone on a retreat. I do worry that my lack of the ability to sit still (and the prying away of my laptop), might have me tied, bound, and/or gagged, by the end of the weekend.

Are you off again, then? Have a blessed one!

Some of our mini-tomatoes might be reddening by the time you get back online. Here's hoping the monster centipedes don't get them before we do!

No, brother Porthos, not yet -- I'm caught in the end of the school year frenetics, so a retreat came to mind (as in how much I'd like to be on one right now). I'll try to schedule one for mid-August.

Monk - the wonderful lady who answers the phone to help folk make reservations can be called @ 703.955-4383. Cheers