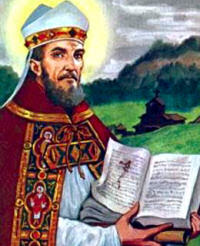 (In the year 718) The Pope (Gregory II) welcomed him warmly, kept him in Rome until spring of the following year, when traveling conditions were favorable, and then sent him forth with a general commission to preach the word of God to the heathen...

(3 years later) In Rome on St. Andrew's Day, November 30, 722, Pope Gregory II consecrated him as regionary bishop with a general jurisdiction over "the races in the parts of Germany and east of the Rhine who live in error, in the shadow of death."

To read of the struggles and success of Boniface link here.

Today we need to pray for another Saint Boniface and for a restoration of the soul of Germany and the rest of Europe. Though the following article is not the most current on Germany and Europe it addresses the problem pretty well. From the Boston Globe Catholic Church withers in Europe,

The Rev. Joseph Fessio, a professor at Ave Maria University in Naples, Fla., who in the 1970s studied in Germany under Ratzinger, said, ''The reason they aren't excited is because his whole country has lost its faith. Get the stats on births, the number of abortions, the divorce rate. The place is a disaster. Catholic Europe is dying because it has lost its soul. And it is too lost to even know that St. Benedict gave it a soul and that the new pope, Benedict XVI, is Europe's last, best hope to restore that soul."

Winfried Roehmel, director of the press office for the Archdiocese of Munich, said that about one-third of Germany is nominally Catholic. But he said fewer than 13 percent attend Mass with any regularity.

Lord, your martyr Boniface spread the faith by his teaching and witnessed to it with his blood. By the help of his prayers keep us loyal to our faith and give us courage to profess it in our lives. Grant this through our Lord Jesus Christ, your Son, who lives and reigns with you and the Holy Spirit, one God, for ever and ever.
Posted by David Nybakke at 9:24 AM