Only Muslim Mobs, or ALL Mobs? 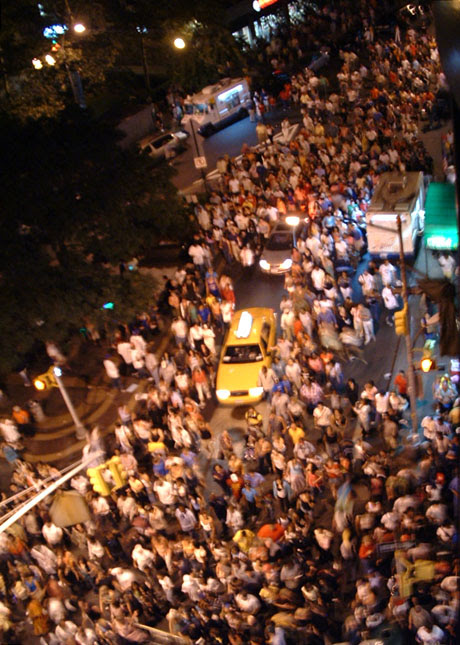 All Mobs
"Baron Bodissey" of the Gates of Vienna, looks at Islam from the perspective of how individuals act and react versus groups and mobs.

This is a vitally important area of research, and one that mimetic theory takes a special interest in. I commented in the Baron's post, linked above, but I want to share my comment here as well:

FWP wrote: as harmless as individual Muslims might seem, in any sort of concentration they become mob-minded and dangerous to others.

How true. But why? And is this observation applicable only to Muslims in mobs?

A popularizer of Girard's mimetic theory, Gil Bailie (author of Violence Unveiled) said this about a sad incident in a Japanese school:

What is going on in a situation like that (a Japanese school boy was bullied, stuffed head-first into a rolled up gym mat, and suffocated) is hard to sum up quickly, but I think we could say this about it:

We stand at a critical juncture in human history, at which many powers are jostling and crowding for stances of control of the destiny of our cultural destiny. We need to remember that Our Lord spoke in simple parables about the difference little things, small things can make: a little yeast in the bread; a candle burning in the darkness shedding great light in a household; a few talents that are multiplied; grains of wheat that fall on good soil.

Each of our decisions help move and create a niche for God's in-breaking Kingdom if they originate in the grace-infused, supernatural theological virtues of faith, hope, and love. And, like Jesus before the crowd demanding the stoning of the woman taken in adultery [Jn 8,1-11], we, too, can stoop-yet-stay with the victim of the crowd/mob. Maybe -- just maybe -- they'll begin to drop their stones and walk away, too.
Posted by Athos at 8:28 AM

Proceeding to stick foot in my mouth, however (and with regards to this one aspect) the post(s) and comments on Gates of Vienna blog are a concern - how they so willingly jumped into the very mob mentality with a projection of mob action being exclusive to Islam and in wanting to rip the sawdust from the eye of Muslims yet they ignore the log that protrudes forth from their own eye. Its mob frenzy when 2 or more of "them" get together in a crowd, but ...

There are plenty of ideologies that are specific to Islam that one can hold up and question, however the mob behavior is not exclusive to Muslims.

I have a feeling that before all the immigration debates (or gay marriage and half a dozen other crucial issues facing our nation) are over we will see fighting in the streets and you won't be able to blame it on Muslims.

Your most excellent post Ath warns how easy it is for us to fall in line with the crowd and forget all about the Eucharist at the center of our altar.

of course, I also haven't had my coffee yet (O: