As some know, I am part of the Secular Franciscan Order (SFO), formerly known as the Third Order of St. Francis. So when I came upon this reference to St. Francis and the Third Order in Pope Benedict's new book, Jesus of Nazareth, I couldn't resist blogging the comment.

“Blessed are the poor in spirit – theirs is the Kingdom of God.”

But it may be a good idea – before we continue our meditation on the text – to turn for a moment to the figure whom the history of faith offers us as the most intensely lived illustration of this Beatitude: Francis of Assisi. The saints are the true interpreters of Holy Scripture. The meaning of a given passage of the Bible becomes most intelligible in those human beings who have been totally transfixed by it and have lived it out. Interpretation of Scripture can never be a purely academic affair, and it cannot be relegated to the purely historical. Scripture is full of potential for the future, a potential that can only be opened up when someone “lives through” and “suffers through” the sacred text. Francis of Assisi was gripped in an utterly radical way by the promise of the first Beatitude, to the point that he even gave away his garments and let himself be clothed anew by the bishop, the representative of God’s fatherly goodness, through which the lilies of the field were clad in robes finer than Solomon’s (cf. Mt 6:28-29). For Francis, this extreme humility was above all freedom for service, freedom for mission, ultimate trust in God, who cares not only for the flowers of the field but specifically for his human children. It was a corrective to the Church of his day, which, through the feudal system, had lost the freedom and dynamism of missionary outreach. It was the deepest possible openness to Christ, to whom Francis was perfectly configured by the wounds of the stigmata, so perfectly that from then on he truly no longer lived as himself, but as one reborn, totally from and in Christ. For he did not want to found a religious order: He simply wanted to gather the People of God to listen anew to the word – without evading the seriousness of God’s call by means of learned commentaries.

By creating the Third Order, though, Francis did accept the distinction between radical commitment and the necessity of living in the world. The point of the Third Order is to accept with humility the task of one’s secular profession and its requirements, wherever one happens to be, while directing one’s whole life to that deep interior communion with Christ that Francis showed us. “To own goods as if you owned nothing” (cf. Cor 7:29ff.) – to master this inner tension, which is perhaps the more difficult challenge, and, sustained by those pledged to follow Christ radically, truly to live it out ever anew – that is what the third orders are for. And they open up for us what this Beatitude can mean for all. It is above all by looking at Francis of Assisi that we see clearly what the words “Kingdom of God” mean. Francis stood totally within the Church, and at the same time it is in figures such as he that the Church grows toward the goal that lies in the future, and yet is already present: The Kingdom of God is drawing near… 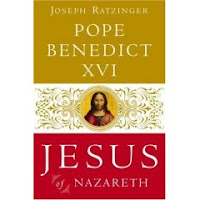 Posted by David Nybakke at 3:03 PM

Thank you for sharing a piece of the Holy Father's wisdom, Aramis. I am still awaiting the arrival of the book. That is the last time I "pre-order" anything. Hrmph.

We would like to include you in our family here at our blog, however for our sanity the 3 Massketeers agreed (amongst themselves) to include comments from people who have some identity. Unfortunately we have witnessed some comments on other blogs by people using the "anonymous" that we would prefer to stay clear of. I would like a chance to discuss your latest comment (which we have not posted as of yet) so if you would respond again proving some identity I would appreciate that.

The book will blow you away, at least, that is how I am finding it so far.