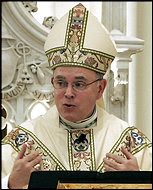 For the Catholic who, when the throngs of individualists get swept away doesn't want to be among the sweepings, George Weigel offers a nine-point condensation of Archbishop Charles Chaput's new book, Render Unto Caesar, in THE CATHOLIC DIFFERENCE: "Serious Catholicism for a Serious Election" An excerpt:

1. Schizophrenic Catholicism is neither Catholic, nor responsible, nor patriotic. “We have obligations as believers,” the archbishop writes. “We have duties as citizens. We need to honor both, or we honor neither.”

2. Postmodern secularist skepticism about the truth of anything is soul-withering; in C.S. Lewis’s phrase, it makes “men without chests.” The current social, political, and demographic malaise of aggressively secularist Europe is an object lesson, and a warning, for America: “A public life that excludes God does not enrich the human spirit. It kills it.”

3. The new anti-Catholicism in the U.S. is not built around antipathy to the papacy, the sacraments, consecrated religious life, or the other bugaboos of those who once ranted about the “Whore of Babylon.” Rather, it’s an assault on religiously informed public moral argument of any sort, an attack against “...any faithful Christian social engagement.” So we can’t rest easy with the fact that the Catholic Church plays a considerable role in American society. There are forces in the land that would banish Catholicism, and indeed classic biblical morality, from a place at the table of democratic deliberation ...