The Joy of Mary's Marriage of Joseph 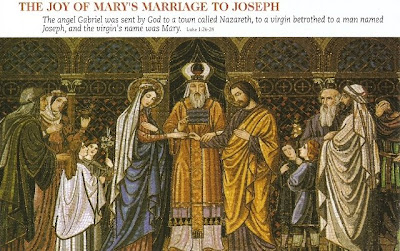 (the following taken from The Franciscan Crown small booklet - The mosaic above is from the Sanctuary of Perpetual Adoration at the shrine of Marytown, Libertyville, IL)

In 1399, the Franciscan Order began commemorating the betrothal of Saint Joseph with a liturgical office that was later developed into the feast day of Joseph as the "Husband of Mary" (now a solemnity celebrated on March 19th). In 1741, the Franciscans requested that Pope Benedict XIV consecrate the whole Seraphic Order to Saint Joseph. Before opening the Second Vatican Council, Pope John XXIII (a Secular Franciscan) declared Saint Joseph the "Paternal Patron of the Universal Church." This proclamation formally recognized Joseph's role as inseparable from Mary's role as "Mother of the Church."

With this long history of devotion to the spousal relationship between Mary and Joseph, it is fitting that those meditating on the traditional seven joys in the life of a married woman, complete their prayer with an eighth joy - Mary's marriage to Joseph.

And, just as Francis could no longer keep his desire to wed "Lady Poverty" a secret from his closest friend, so too Joseph must have sung an anthem of praise at being chosen from all time to wed the most beloved of God.
Posted by David Nybakke at 1:55 PM