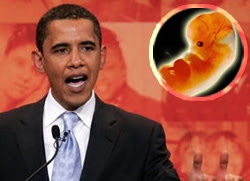 Widely syndicated columnist Linda Chavez argued two weeks ago that Obama's Illinois voting record would come back to haunt him and pointed out that, with his black liberation church affiliations, he had even less grounds than Kerry for taking Catholic support for granted. "Barack Obama has a Catholic problem. If he doesn't do better than John Kerry did in 2004 with this quintessential swing voting bloc, he won't be elected ... Catholics are by no means a single-issue voting group. But for observant Catholics, those who attend mass regularly and follow the church's teachings, a candidate's position on abortion matters."

Regardless of how daunting it may appear to have a strongly pro-abortion , cafeteria-style Catholic like Joe Biden as a running-mate, the block of faithful Catholics alluded to above know a mortal sin when they see one, thankfully. [h/t: Real Clear Religion & David Hartline]

But if worse comes to worse, and an unrepentant Obama/Biden ticket should gain the White House, then, as Karen Hall rightly warns us, We deserve whatever happens to us.
Posted by Athos at 7:19 AM