Benedict XVI answers, What Does "the Following of Christ" Really Mean? 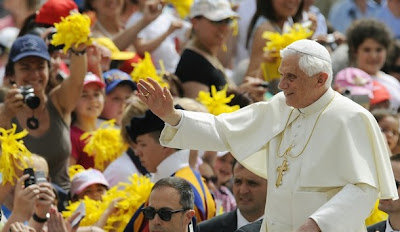 What does "the following of Christ" really mean? Is this following a real possibility for modern men and women? Does it perhaps even point out the only way of becoming and being a human person? If so, then a Christian may assert that the following of Christ embodies the decisive possibility for the human race and that only this following brings to light the real nature of the enigma that is man... What does the "following of Christ" mean?... "Following" is something quite external but at the same time something very interior as well. Something external: an actual walking behind Jesus on his journey around Palestine. Something interior: a new direction for one's life, which no longer has business, the earning of a livelihood, and one's own wishes and ideas as its central points of reference but is surrendered to the will of another, so that being with this other and being at his disposal are now the really important content of a human existence... To follow really means to go behind, to move in the direction prescribed, even if this direction is completely contrary to one's own wishes. Precisely because the word "follow" is meant so literally, it affects the innermost depths of the human person. The words "Follow me!" contain, first of all, a summons to give up a previous calling. At a deeper level, however, they are a summons to give up one's very self in order to live entirely for him who, for his part, willed to live entirely for the Word of God: so much so that later reflection could recognize in him the incarnate Word of God himself. - Dogma and Preaching, pp. 11-13

We now come to obedience. Jesus lived his entire life, from the hidden years in Nazareth to the very moment of his death on the Cross in listening to the Father, in obedience to the Father. We see this in an exemplary way at Gethsemane. “Not my will, but yours be done”. In this prayer Jesus takes up into his filial will the stubborn resistance of us all, and transforms our rebelliousness into his obedience. Jesus was a man of prayer. But at the same time he was also someone who knew how to listen and to obey: he became “obedient unto death, even death on a cross” (Phil 2:8). Christians have always known from experience that, in abandoning themselves to the will of the Father, they lose nothing, but instead discover in this way their deepest identity and interior freedom. In Jesus they have discovered that those who lose themselves find themselves, and those who bind themselves in an obedience grounded in God and inspired by the search for God, become free. Listening to God and obeying him has nothing to do with external constraint and the loss of oneself. Only by entering into God’s will do we attain our true identity. Our world today needs the testimony of this experience precisely because of its desire for “self-realization” and “self-determination”.

Romano Guardini relates in his autobiography how, at a critical moment on his journey, when the faith of his childhood was shaken, the fundamental decision of his entire life – his conversion – came to him through an encounter with the saying of Jesus that only the one who loses himself finds himself (cf. Mk 8:34ff.; Jn 12:25); without self-surrender, without self-loss, there can be no self-discovery or self-realization. But then the question arose: to what extent it is proper to lose myself? To whom can I give myself? It became clear to him that we can surrender ourselves completely only if by doing so we fall into the hands of God. Only in him, in the end, can we lose ourselves and only in him can we find ourselves. But then the question arose: Who is God? Where is God? Then he came to understand that the God to whom we can surrender ourselves is alone the God who became tangible and close to us in Jesus Christ. But once more the question arose: Where do I find Jesus Christ? How can I truly give myself to him? The answer Guardini found after much searching was this: Jesus is concretely present to us only in his Body, the Church. As a result, obedience to God’s will, obedience to Jesus Christ, must be, really and practically, humble obedience to the Church. I think that this too is something calling us to a constant and deep examination of conscience. It is all summed up in the prayer of Saint Ignatius of Loyola – a prayer which always seems to me so overwhelming that I am almost afraid to say it, yet one which, for all its difficulty, we should always repeat:

“Take O Lord, and receive all my liberty, my memory, my understanding and my entire will. All that I have and all that I possess you have given me: I surrender it all to you; it is all yours, dispose of it according to your will. Give me only your love and your grace; with these I will be rich enough and will desire nothing more”.