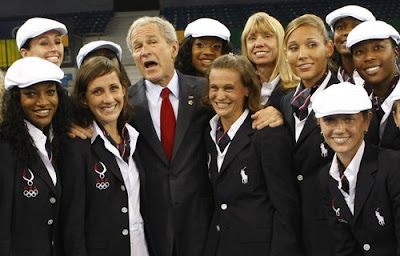 President Bush rests his left hand on the shoulder of Bloomington High School graduate Christin Wurth-Thomas while posing for a photo with the U.S. women's track and field team prior to the Olympic Games opening ceremony in Beijing on Friday, Aug. 8, 2008. (AP Photo/Gerald Herbert) The 28-year-old Wurth-Thomas, who won Class AA state 800-meter run titles for BHS in 1997, 1998 and 1999, will compete in the 1,500, an event in which no American woman has ever medaled.

Article from The Pantagraph
Spirits will soar as the 596-member U.S. Olympic team marches in today’s opening ceremonies at the Olympic Games in Beijing. Central Illinoisans will go along for a vicarious ride of excitement as they follow the fortunes of three Olympians of their own: Bloomington’s Ogonna Nnamani and Christin Wurth-Thomas and Mason City’s Vic Wunderle.

Having three “home-grown” Olympians at the same time is believed to be a record for the Pantagraph circulation area. (Five men with ties to Illinois State competed in the 1972 Olympics for three different countries.)

Bloomington has as many Olympians as the states of Wyoming, South Dakota, Alaska, Mississippi and New Hampshire and one more than the states of Delaware, New Mexico and Tennessee. Montana, North Dakota and West Virginia have no Olympians.

The cities with the most Olympians, according to the U.S. Olympic Committee, are New York City with eight, San Diego and Seattle with seven each followed by Atlanta, Ga., and Cincinnati with six apiece.

The 32-year-old Wunderle, a three-time Olympian, helps round out a straight flush of sorts for the five-member U.S. archery team which has a five-time Olympian (Butch Johnson), a four-timer (Khatuna Lorig), a two-timer (Jennifer Nichols) and a first-timer (Brady Ellison).