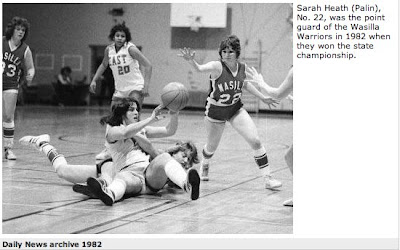 Palin was the point guard and captain for the Wasilla High School Warriors, in Wasilla, Alaska, when they won the Alaska small-school basketball championship in 1982; she earned the nickname “Sarah Barracuda” because of her intense play. She played the championship game despite a stress fracture in her ankle, hitting a critical free throw in the last seconds. Palin, who was also the head of the school Fellowship of Christian Athletes, would lead the team in prayer before games.

tip from Financial Beast - A Blog about The US Economy
Posted by David Nybakke at 9:41 AM