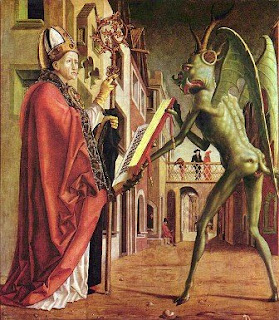 When in the Gospel of Luke it said that ’Satan entered into Judas’, it meant that he fell into the grip of accusation. There is nothing more powerful than that. When one suddenly feels that one can with absolute assurance point the index finger and say, “there’s the one!” – there is a tremendous intensity that comes from that and it is precisely that intensity that seems like such a relief from the banality of the ordinary daily life – now we know for sure. There is something tremendously intoxicating about that.

Satan is really the transfiguration of human self-delusion and the evasion of our moral responsibility for what we do. Satan is a myth. Now the satanic is not a myth – satanic happens. We fall into the grip of Satan, but when in Luke, Jesus says, ‘I see Satan falling like lightning from heaven’ he is announcing that Satan, as a metaphysical entity will be de-constructed. And we will realize that Satan simply represents a metaphysical projection of our own violence and cruelty.