Franciscans Celebrate 800 Years of Their Founding 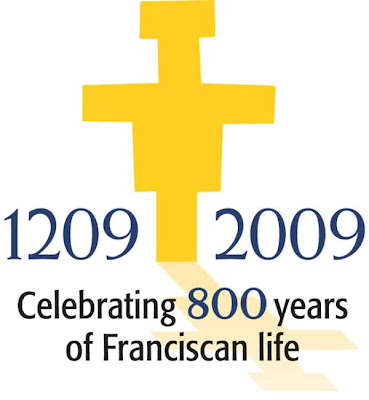 Some time in the year 1209, Francis of Assisi and his eleven companions walked into the august Basilica of St. John Lateran in Rome for an audience with Pope Innocent III. A papal residence since 324, the basilica gave up this claim when 16th century popes began living in what is today known as Vatican City. In 1209, however, St. John Lateran was the earthly center of the Roman Catholic Church. Francis along with his 11 companions traveled the 186 kilometers from Assisi to Rome along ancient roads to ask Innocent for oral approval of their Franciscan way of life. Innocent - having dreamt of Francis holding up a disintegrating Basilica of St. John Lateran - heartily granted the approval, thus helping to solidify the Franciscan Order.

Read more about the celebration in Assisi and also read about the effect Francis had on G. K. Chesterton HERE.

And Friar Jack has some words on this event as well HERE.

And HERE is a link of related articles:
In 2009, the Franciscan family celebrates the 800th anniversary of its origins, when St. Francis and his companions received from Pope Innocent III in 1209 formal approval of a new brotherhood. The central event of the Eighth Centenary year for the Franciscans of the First Order and the Third Order of St. Francis is to be held April 15-18, 2009 in Assisi and Rome.

Click HERE for Friar Pat's blog commemorating the 800th anniversary of the formal founding of the Franciscan order.
Posted by David Nybakke at 11:44 AM