In these times where do you get your substantiation - your validation?


"Who I am makes a difference" project. Truly awesome! And I love what is behind the love of this project. But have we ever really stopped to ponder the need for it.

I would imagine that in your local "news" paper you have seen such headlines: Suicide Rate Increasing In US or like in my paper today, Tough times have suicides on the rise in McLean Co. Programs like Who I am Makes a Difference are great yet for me they do not get to the 'cross' of the matter?  Is this not an issue of self-substantiation? 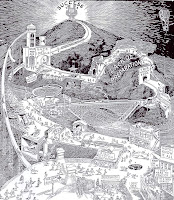 (to enlarge picture right click on it and select Open Link)
In this poster there is, at least from a worldly sense, for seekers of success, a pretty realistic image of the difficulty of obtaining success. This goes well with the etymology of the word and title of the magazine, 'etude' - along with it meaning 'a short composition for a solo instrument; intended as an exercise or to demonstrate technical virtuosity' it is derived from the French étude, from Old French estudie, which is the study or the application of the mind to the acquisition of knowledge.
As a graduate of a couple "leadership" programs to me this poster represents the world view of modernism and its concept of achieving success or validation. I have also come to see it as a parody of Christ's version of substantiation: abide in me and I will abide in you.
Gil Bailie helps us to get underneath the entire validation or substantiation crisis especially when we are striving for substantiation void of conversion, desperately clinging to structures which the Paraclete is gradually deconstructing.

In other words, if I am no longer at home in the culture world – if I can no longer derive my sense of social significance – psychological grounding, all the rest of it, for my social consensus – where then do I go to get it?

“I am the vine, my father is the vine dresser” and you are the branches.

Jesus says to make your home – you have to have a home – you have to be at home somewhere for you don’t belong to the world anymore – make your home in me and I will make my home in you. Abide in me and I will abide in you and then you will have some grounding. - from "A Light Shone into the Darkness - Reflections on the Gospel of John" - by Gil Bailie
(tape 10 end of side B)

Lord help us to be instruments, back to being grounded in the inspiration of YOUR WILL and help us be a source that verifies and loves everyone we meet and to spread YOUR LOVE wherever we go.
Posted by David Nybakke at 1:11 PM

A fascinating comparison and contrast is listening to Bailie's John's Gospel tapes and his recent Emmaus Road Initiative CD/MP3 (March) on the topic of Christ's Resurrection.

The man has definitely moved from a higher criticism stance ("It would be even more interesting if the body were still there...") to it was an historical event and physical resurrection ("He asked his friends for some breakfast").

Funny it didn't bother me much at first, listening to his commentary on John. Now I'd rather not say how I feel about it. We do all change, though.

You know Ath, because of my own 'liberal' background I personally struggle with the "time-line" critique (the "fascinating comparison and contrast" - before and after scenario). In fact this is where I beat myself up so bad when looking over my past actions and words - if only I knew what I know now then! But I didn't. So with my own life progression as an example I come to reconcile the differences pretty easily. To me, for sure, it is the same Gil.