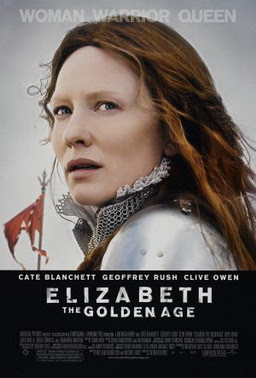 Steve Greydanus gives a review of "Elizabeth - The Golden Age" that I expected, seeing the trailers. Greydanus calls it, aptly, a "Christopher Hitchens vision of history." If that isn't enough warning, Hilaire Belloc reminds readers that the queen's speech before and review of the troops at Tilbury --- as she rides in armor and tremulous tones of bravery --- was actually given after all English encounters with the Spanish armada, not before as the movie purports [HTRH, 243].
For another review, see Roger Ebert’s review. In it, Ebert asks, "Can there be a third Elizabeth film? Of course there can ... With the same cavalier attitude to history as this second film, we could be talking about 'Elizabeth and Shakespeare in Love.'"
Posted by Athos at 6:35 PM