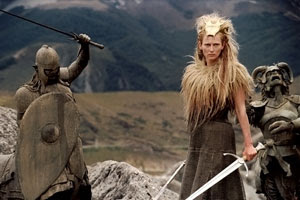 While all Christians look forward in eschatological hope for our True Home in the divine perichoresis of the Most Blessed Holy Trinity, known lovingly during the Middle Ages as the Beatific Vision, such essential twentieth century writers as C. S. Lewis and J. R. R. Tolkien acknowledge that our earthly vocations must include doing battle with exemplars of evil whose life and livelihood seem intent on destroying that which is true, good, and beautiful.

Lewis, as I note in this post, expressly states the utter need in extremis to do so. Tolkien, who like Lewis (in so many ways) fought and was wounded in the trenches of World War I, depicted the fight for Middle Earth as a mix and blend of warfare, providence, and bravery the likes of which just barely saved truth, goodness, and beauty by the narrowest of margins.

While contemplation of the Most Blessed Godhead is a vital part of our mission today as followers of Christ, is it all we are called to do? I think not. While in these "shadowlands", as Lewis called our troubled world, we are called to love and forgive even our enemy; but also defend all that we call good through legitimate defense. Occasionally the faithful thing to do is to do one's best to stop destroyers, practicing faith, hope, and charity in so doing.
Posted by Athos at 5:49 AM

What is it in our 2 different outlooks that seem to put us at odds?

May I ask if you feel that my posts that focus on the real-ness - the sacrifice - the love - the Trinity of the Mass (as O'Connor says, "if it's just a symbol the hell with it") is not the place to enter into the Biblical Story, becoming such instruments of God that are prepared for the battles that you warn us of?

(You write) While contemplation of the Most Blessed Godhead is a vital part of our mission today as followers of Christ, is it all we are called to do?

Does not the Mass logically, spiritually and anthropologically follow your question? Does not what Gil refers to above, that the Mass (more than) authorizes each of us into His new creation, have to be one of the most important thing fought for and defended? Isn't it at the heart of what it means to be Catholic - not just a sidebar only preceeding your question, but not answering it?

Is the Mass simply an exercise in contemplation like I understand your question in this post to be saying?

It seems to me that the "shadowlands" become even more dark and gloomy if what we do and say at Mass are simply human/Protestant words.

Isn't this one of the battlefronts that Benedict has drawn the line on (as this article points out)? One of the focuses of this battlefront is to sharpen and enliven every detail of what it means to be a follower of Christ and therefore charges each to re-enter the "shadowlands" as Christ-links, being witnesses for and of Christ. This very mystery IS at the very heart of our calling, our vocation while in the "shadowlands" of this world.

May I ask if you feel that my posts that focus on the real-ness - the sacrifice - the love - the Trinity of the Mass (as O'Connor says, "if it's just a symbol the hell with it") is not the place to enter into the Biblical Story, becoming such instruments of God that are prepared for the battles that you warn us of?

I don't think trying to answer your bombardment of questions, Aramis, would be useful to clarifying things. But it seems as though you see my position as (1) advocating using the Mass to prepare for a wholly un-gospel oriented warfare; (2) being a protestant approach to the Holy Eucharist; and (3) a lack of understanding of the true nature of vocation - being called by God.

I would, naturally, disagree with all three suppositions. You, IMO, seem vvery selective regarding mimetic theory, quotes by Bailie, and the breadth of definitive statements by the Magisterium of the Church.

Mimetic theory makes no claims other than indicative descriptions of the malaise of human culture. Bailie isn't stuck solely in words on tapes from years ago, as seen here, where he is coming close to advocating defense of Christian values and institutions (and undoubtedly there will be more to come). And the Church, if we believe what Jesus of the Gospels says, will represent His will in meeting challenges of each new era through the Pope and Magisterium.

It is more Protestant to stick solely with the New Testament and one's personal interpretation of it than in following what the Church has taught definitively through the Catechism with trust in Christ's promise never to leave it comfortless, without His guidance, and sacramental Presence.

I am devoted to the Real Presence in the Sacrifice of the Mass. I believe and try to live in accord with the Magisterium. And if the Church teaches "legitimate defense," I will live by that too. Cheers