Because my name is Lazarus and I live. 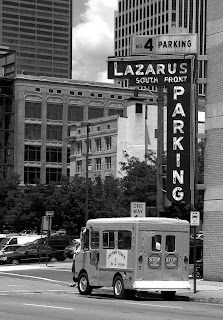 My little ditty here is a way to lead into the Chesterton quotes that came to mind while I was at mass this morning.

It happened once again,
head bowed in prayer during
Mass this morning.

Nothing special with the homily,
maybe it was because a
friend returned from vacation.

There it was, the vastness
of ... everything rose from
the altar - no special fanfare

I remembered Chesterton
giving voice to this moment
not visible from outside.

"Only, when he has entered the Church, he finds that the Church is much larger inside than it is outside."

THE CONVERT
After one moment when I bowed my head
And the whole world turned over and came upright,
And I came out where the old road shone white,
I walked the ways and heard what all men said,
Forests of tongues, like autumn leaves unshed,
Being not unlovable but strange and light;
Old riddles and new creeds, not in despite
But softly, as men smile about the dead.

The sages have a hundred maps to give
That trace their crawling cosmos like a tree,
They rattle reason out through many a sieve
That stores the sand and lets the gold go free:
And all these things are less than dust to me
Because my name is Lazarus and I live.

"The Catholic Church is the only thing which saves a man from the degrading slavery of being a child of his age."

Cool, Aramis. I hear music. I'll bet you or D'artagnan could put some riffs together and come up with an awesome rock beatin' song with that. Some close harmony and we're talking something that even Fair Maiden Dawn Eden might take musical note of.

Yeah, add to the beat, the 3 of us backing up the great "lead voice" of Porthos and we got ourselves a real ... a real, well, not sure what we got ourselves, but it sure wood rock.