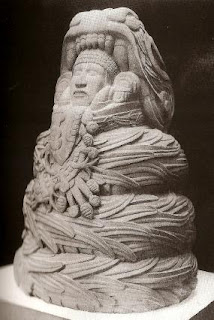 (Apologies to any genuine snake handlers . . .)

As a favor to a former student, I proofread a paper on D. H. Lawrence. The paper was fine as a lit. paper, but some of the facts that came out in it were head scratchers for me.

It was paper was on The Plumed Serpent (I haven't read it, but have at various times read most of Lawrence's other work). A key episode in the novel is when the character Kate takes part in a traditional Aztec snake dance and experiences a rebirth. The raw, primitive masculinity of the guys in the dance make her feel like a virgin ("Uw! Touched for the very first time.") She is figuratively resurrected as an Aztec goddess. Eventually she marries a key figure in the Aztec dance revival, who is himself a figurative ressurection of the Aztec hummingbird god--the hummingbird sucking nectar from a flower being connected with ritual bloodletting. (Resident Girardians take note.) All of this has much to do with "blood consciousness" and "phallic consciousness" and Lawrence's ideal of womanhood, which is earthy and, er, submissive. (Feminists take note).

Two facts came out in the paper. First, the female Aztec goddess never existed (instead, the figure in the dance is likely connected with an Indian slave woman who was the mistress of Cortez). Secondly, the Aztec snake dance was invented by Lawrence as well, a lot of it transposed from a Hopi snake dance he observed (with approval) in New Mexico. In fact, Lawrence was reportedly dissappointed that there wasn't a living tradition of native religious dance in Mexico. (How considerate of him, then, to create one out of whole cloth!). These factoids about Lawrence's non-factual facts are noted in passing by my former student, and neither criticized nor praised (which is OK--the paper is impartially describing Lawerence's spiritual vision and what components he needed to create in the fiction to make it work).

As for me, I was sort of like, "So, let me get this straight. To portray the revitalizing power of authentic pagan spirituality, Lawrence has to invent an 'authentic' pagan spirituality in the form of a Aztec snake dance that Mexicans don't actually perform, and an Aztec goddess that never existed. Oooookkkaaaayyyy." It struck me further that Mexicans actually do have a very strong traditional devotion, centered on Our Lady of Guadalupe--who also, as it happens, has a reputation for somewhat decisive snake stomping. One can speculate as to why the devotion to Our Lady of G. would not dovetail very neatly with the Lawrencian agenda. (Not kind to snakes? Not submissive enough?)

Finally, Lawrence's enthusiasm for multiple resurrections is curious. I remember his short story, "The Man Who Died," which put in narrative form his vociferous objections to the resurrection of Christ. It seems that (somewhat like Andy Warhol's 15 minutes of fame) every Tom, Cipriano and Kate gets to be resurrected, just as long as they are not Jesus Christ.

End of literary rant.
Posted by Porthos at 11:45 AM

A cursory comment with more to follow: this post dovetails neatly with Gagdad Bob's observation about science's unacknowledged dependance upon 'intuition'. Lawrence seems to say that his sincere intuition re: pagan spirituality, rebirth, etc. are superior to that taught by the Magisterium simply because it comes from his sincere intuition.

A head-scratcher, yes, but a dangerously potent notion to millions upon millions of denizens in the old, depleted West. Other extensive studies made by fine scholars, IMO, draw lines from the Enlightenment through the present morass of nihilism that show similar symptoms. Great post, P.