Have We Entered into the Story? 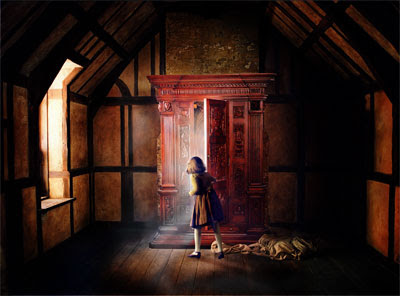 ...there is no alternative to sacrifice, the only question is what kind of sacrifice is it going to be? In Jesus’ re-interpretation of it all, it is the anticipation of the messianic banquet and the induction of us all into the body of Christ. So this piece of furniture and the ritual we celebrate around it is absolutely at the throbbing heart of the Christian mystery. This piece of furniture is like the wardrobe in Narnia – you Episcopalians will always know Narnia better than any other denomination – it’s the wardrobe in Narnia where you enter into the story – the real story – where the story becomes vivid.

For much of my presentation so far I have talked about the story, recovering the story in scriptural terms, and of course we have to do that. But there is this place where we actually enter the story. We don’t just learn the story, and say the story, but we become actors in the story; we begin to perform the story. And I don’t think we should be too self-conscious about that kind of language. Refer to the unbelievable central passage from Paul, “I live now not I, but Christ lives in me.” We have to take that at face value. One has to say about that what Flannery O’Connor said about the Eucharist, if it is just a symbol, the hell with it. It is not just a symbol. Christians are here to be incorporated into the work of Christ in history.

Jesus never claimed to be operating on his own. He even says in John’s Gospel, “If I had come in my own name you would believe me, but because I have come in the name of the one who has sent me you don’t believe.” We are asked to be like that. We are asked to re-present Christ to the world. To be actors in the great drama – like von Balthasar’s ‘Theo-drama’, a magnificent orchestration of the grandeur of the Christian drama in history - and so the language of drama is appropriate – and the language of re-presenting it to the world in however way, even though we are all clay vessels, we are all clumsy, we’re all fallen and sinful, we don’t do a very good job of it, despite our clumsiness God knows how to use leftovers and misfits – in fact our clumsiness is part of it, our failures to do it are part of it.

We are called; we are incorporated; we are deputized to receive into our lives - personally and with our communion with one another - the spirit of Christ, and to step into the world and absorb all the anxieties, uncertainty and the confusion and be part of the light of Christ in the world. Having had the rug pulled out from under us as Jesus has done, without our stepping up as Christ-links, the world is going to go to hell in a hand basket. And we see that happening in many parts of the world today.

Jesus says take this cup, which is the cup of suffering. We don’t have to be melodramatic about it; there is suffering in our lives. The suffering that I should understand as redemptive is my suffering. The sufferings that I see other people undergoing I should not think that I am going to take it away, I won’t be able to, but I can be present with them in that suffering so they can feel that they are not alone in that suffering and perhaps feel the truth of the situation which is always, always, always that Christ is in it with them. They may not be able to experience that unless they know that I am in it with them. That may be their only entrée to the discovery that Christ is in it with them. Being in that suffering with others, and of course, that sometimes means helping to relieve the suffering, is our responsibility. Mother Teresa once answered a journalist’s comment, “…but you’re not suffering.” She said, “I am not worthy.” So all of us in this room have suffered, and some of us a great deal, but those who have suffered the most are worthy of it. And those of us who have suffered less must have admiration for those, and we must try to be there so they can feel God’s present.

We are called to bring forgiveness into the world, being there with people who are suffering from their own unforgivenness and being simply an agent in the presence of whom people can begin to feel forgiveness. Forgiveness is a great mystery; it is not some sanctimonious thing that somebody who has it gives to somebody else. It is a spirit that infects us – it always has an infecting agent. There is always somebody who brings it in and introduces it into a situation of unforgivenness, and it is our Eucharistic responsibility to be about that business. In order to be able to be about such business, we have to experience the kenosis (meaning: a self-emptying) of Christian discipleship. So we take our lives, and this is our supreme privilege, we must not see this as some kind of melodramatic act of renunciation, it is the source of our freedom, to take our lives, thank God for them because it is a gift to us, and break them or let them be broken and give them away. And then, Jesus says, “do THIS in memory of me.” Do what? Do this in memory of me. Not just the gesture, of course we do the gesture; of course the Real Presence, but when Jesus says, do THIS, He is talking of something much more vast then that. He means doing that which the gesture represents – being Christ in the world.
Posted by David Nybakke at 2:35 PM

BTW, your mentioning how much he has a tendency to pack into his talks ... well, that's Gil. You are sure to hear something "for the first time" nearly every time you listen to his talks.