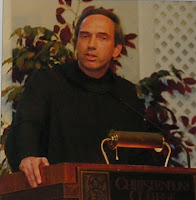 From the article in Instaurare – The Chistendom College Update (July 2007):
Benedictine priest and Professor of Anthropology at St. Vincent's College Reverend Mark Gruber, OSB, delivered a talk entitled Islam Among the Nations at Christiandom College on Monday, April 2, before a crowded auditorium.

According to his vast research on the matter of Islam and its followers, Gruber believes that Muslims cannot be citizens of another nation, for they belong to the nation of Islam. The Muslims who try to spiritualize the teachings of the Koran are a very small minority, less than 1%. The message of the Koran is realized in an earthly state.

Gruber received a Masters in Anthropology and a PhD in Anthropological Sciences from the State University of New York. His anthropological studies in the religion of the Middle East have helped establish him as a nationally circulated spokesman regarding the culture of Islam. He has authored Journey Back to Eden: My Life and Times Among the Desert Fathers.

"The mainstream media likes to paint a picture that Islam is peaceful and that it is just extremists who hold this point of view," he continued. "But that simply is not true. While I was working on my Doctoral Dissertation, I spent a year in Egypt and other Muslim countries. During that time I got to see first-hand what the Muslim children were learning. And it was pretty enlightening! Parents would teach their children songs about killing the infidel -- songs about death and destruction. Cars, with loud speakers attached, would drive through the streets repeating the message, 'Let their women be raped, their men be killed, and their children enslaved.'"

"To be able to accurately judge a religion, we have to pay attention most importantly to what it teaches its children, not to what it says to the outside world," Gruber said. "No progress will be made unless we speak to each other with self-respect and honesty. There is hope for peace, but we must face the facts and use common sense."
Posted by Athos at 8:19 AM

I won't post on it, but it dovetails with what Father Gruber says in this post. Mr. Kasem writes:

As a child, I was asked to memorize the verses of Koran. I used to ask the Hujur (Mullah) what meanings were conveyed by those verses? The reply I used to get from the Hujur was a few strokes of the cane and rebukes. He used to say that one should never ask any question on the matter of Islam especially on Koran. The penalty for asking questions is whipping. So, I stopped questioning and memorized the verses without understanding anything. The Hujur was a symbol of terror to me. I had no choice but to follow whatever he asked of me. That was how fear was and still is being introduced in the minds of the people and these bigots are repeating the same things over and over again. This is what is called a mass hypnotization induced through intimidation and fear. The fact is that if the real truths about the religion leak out these Hujurs will be out of work. Pure and simple.