God in a World of Violence

Your most excellent post Good News Ath and the question, "But won't any religion do?" made me think of my notes from when I led a class on the book Franciscan Prayer by Sr Ilia Delio concerning the God question – pg 55 - 62.

If you are not birthing Christ who or what are you likely to birth?

From: God in a World of Violence by Sr. Diana Culbertson 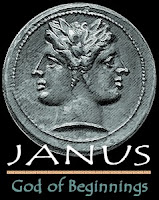 The Romans had a household god known as Janus. This god was always pictured with two faces – one looking back, one looking forward. He was the god of the past and of beginnings. The doors of the temple of Janus were open at times of war, closed at times of peace. Other versions of this god suggested that he was a god of mercy and of justice. The Persians had two gods: a god of light (Ahura Mazda) and a god of darkness (Ahriman). These two gods accounted for the good and evil in the world. Curiously, many religious believers tend to divide the one God into two: a God who rewards, a God who punishes; a God who curses and a God who blesses. But does the God in whom we believe have two faces? What kind of God did Jesus reveal to us? Was this Abba, this Father of Jesus, just like the God in whom the Jewish people already believed? How was this God different from the God that we project, that we imagine, that we sometimes fear? 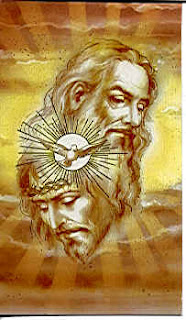 Overview – Session 6
The death of Jesus as the innocent victim of human violence, and his being raised to life through the power of the Holy Spirit, reveals the face of God. In God there is nothing but infinite life and love. God has given us his Son who suffered hatred and rejection, who chose to pour out his life so that we could know him and know the infinite love and forgiveness of his Father. Jesus has identified himself with all victims of human violence and all who suffer. Our response to the astonishing love of God for us is to see Jesus in the hungry and the poor, the imprisoned and the weak – all the outcasts of the world. Only the message of the Gospel can heal the world of violence. Only the Holy Spirit can defend us from the evil that threatens to destroy the world that God created out of love.


Sr. Culbertson, an Akron Dominican Sister, is Professor of English and Comparative Literature and Director of Religious Studies at Kent State University in Kent, Ohio and past President of the Colloquium on Violence and Religion. God in a World of Violence - ISBN: 1-56077-710-9 Grade Level: Adult 64 pages
Posted by David Nybakke at 5:20 PM

If you are not birthing Christ who or what are you likely to birth?

Your post is wonderful, Aramis. I'd love to have been part of the classes.

When I was a pastor, I knew highly successful professionals in nearly every field. What puzzled me greatly was the way that these high power folk (medicine, law, etc.) managed to make shambles of their personal -- usually family and married -- lives.

A characteristic that left me gaping in astonishment was the way MOVIES seemed to carry a kind of transcendence for them. And not just any movies, but things like JOhn Travolta in PHENOMENON, or LEAVING LAS LEGAS: magical powers in the former, and a suicidal man who drinks himself to death in the latter.

What can these people be thinking? I would wonder. Once I confronted a medical comptroller in my congregation, and she nearly left the church over my lack of appreciation for her favorite movie ...

I'm not blaming Protestantism on this. I'm merely substantiating your question (above). "All we like sheep have gone astray" and "Whoever does not gather with Me (Jesus) will be scattered."

I'm sure I seem like a pretty sad specimen to those spiritual giants looking down on me, but people today are so gullible, so susceptible to "Looking for Love in all the Wrong Places."

Ah, Ath, I don't know what these people be thinkin'.

One issue I had with using that line at the beginning, "If you are not birthing Christ who or what are you likely to birth?" is that it seems too much like it is the individual doing it - doing the birthing. You know? And that's not it. But one thing is that people got the point as we went through the different 2 headed gods and saw how we used these mythological images to hide our own violence. "God in a World of Violence" is a great booklet for study, if not also a great reference to use as a suppliment for other studies like the one I did with Franciscan Prayer (which was nice because Ilia Delio has referenced Bailie and Girard in her writings).

I have to admit that if you look at Aramis' profile you will see under favorite movies, ... yeap, PHENOMENON. I guess I am still a sucker for the romantic movie depicting the poor guy scapegoated for what we don't understand. I wasn't into the magic, but rather the potentiality of what we are "becoming" in a way and yet rejected. Its more about a Girardian feel than a Catholic feel for me, but that's enough on that as I am NO film critic!

In the same church, I had a spectacular older couple whose 3 children had been ravaged by Scientology -- why am I capitalizing the word, for Heaven's sake?

I can't see Travolta or Cruise w/out a queezy feeling, regardless of the characters they portray. Sorry.

Sorry, Aramis. I took the discussion into left field w/the movie diatribe. Back to your topic:

The "shining example" of the Christian faith has always been the self-sacrifice of the saint and martyr. Modeling Our Lord's ultimate sacrifice on the Cross. This is part of our "template", as it were. Even the most worldly Christians (mafioso, backsliders, success-seekers, et al) are struck by this holiness when confronted by it. Indeed, it is what the Centurion saw at the foot of the Cross that gave him grace to say, "Truly, this was the son of God!" [Mtt 27,54b]

But the "shining example," as Bailie has noted, of Islam is not one of self-sacrifice per se. This is why the great majority of co-religionists would cover for or protect their devout brothers or sisters who carry out acts of violence against the enemies or persecutors of Islam.

And, as I said in ”Good News,” that implacably has to do with one's image of God and the source of that revelation about the nature of God.

Christians who want to hold fast to the image of God revealed perfectly by Jesus Christ are in for difficult and trying days in this age: we don't want to deny the truth held and guarded by the Catholic Church about the true nature of the Most Holy Trinity -- and the implications of how we are to live in the light of that truth -- but neither do we want to kiss good bye to the best that remains of Christian civilization as it is overrun by the iconoclastic believers of another and very different image of God as harsh Taskmaster and Warrior.

For now, I'll cling to the Church's teaching on "legitimate defense," since our foe seems to have a "If I feel especially devout, I can blow up, destroy, take as many as I can with me" card that he can play any time and any where. For now.

And one last thing! I would exercise legitimate defense for that same fellow if any one were trying to do him injury wrongly too. This is simple justice in the Thomistic pov.