Can This Be True? Catholics Have Become Mainstream America

Ath, do you think this flow-chart below represents fairly a model of "dumbing down" as you posted in, Complicated Key vs Dumbed-Down Faith? Or, with tongue-in-cheek, could this really be the model for raising up our faith?

The next question is, are we dumbing down our faith or is our religion raising up our culture?
The following is from The Barna Research Group:
Catholics Have Become Mainstream America

Do you remember when Catholics were a distinct segment of America, and many people wondered what to make of them? Those days are long gone, according to the latest Barna survey. Catholics are not only the largest denominational group in the U.S., but are now part of the social mainstream. The survey explored 97 facets of the lives of Catholics and compared them to national norms. The outcome is striking - and, in some cases, disturbing.

I have to agree with our friend Genevieve at Real Clear Religion, CATHOLICS MUST RECLAIM THEIR SPIRITUAL AND CULTURAL DISTINCTIVENESS - see her comments on this by clicking here.

(The following are thoughts from Aramis.)
The flow-chart above represents the current educational model for science as critiqued by British science teacher Mike Horne F.G.S. (I substituted the word 'religion' for 'science' for use in this post.) He wrote how his profession has fallen-in-line with the dumbing down educational process (which I will not go into any further here).

I find it interesting that from educators as well as from catechists there is growing concerns about the dumbing down process and how it has us spiraling into what seems like a black hole of empty and barren information. From math and science to history and anthropology to religious studies ... all of these have undergone a serious thinning of their roots by such contributing factors as teaching/learning through 'sound-bytes', attention deficit, hyper-distraction, on and on. This spiraling is and has the effect of what Girard calls a crisis of desire (compulsive, preoccupation of the other). 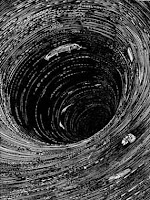 So trying to peek my head out from within this spiraling vortex, I can barely make out a problem; how to get my arms around such a profound concept when I want only the simplified version of our Christian faith because I am caught up inside the spiraling vortex of keeping up with everyone else. (Is this what they call a crisis of priorities?) Am I the only one in this vortex?

So I ask, are we 'doing' ourselves any favors by dumbing ourselves down by stretching ourselves so thin on a steady diet of constantly 'doing'? And what is this 'doing' for us? Or better yet, does not this 'doing' originate from our desire, that is our compulsive, preoccupation of the other? Wouldn't we be wise to re-orient our desire - in other words, wouldn't we be better off abiding in the One True Source instead of being tossed to and fro for all our 'doing'?

Possibly this dumbing down is part and parcel to the dying of the old foundation of knowledge that is being destroyed by the revelation of the Gospel. But as this occurs, and all foundations crumble, including our psychological grounding, the problem is that we need to be about the business of the Gospel, as told by the Sermon on the Mount.

The following is but a very short excerpt from The Gift of Self by Gil Bailie as he reflects on a quote by de Lubac.

"There is no unique subject: no personality without otherness; no consciousness turned in upon itself; no real being without intersubjectivity; no real knowledge nor ontological density without mystery. And no man without God." - Henri de Lubac

For us studying these thoughts as we are: No real knowledge without mystery or better yet: no real knowledge without genuine transcendence. The old logos, the old religions which gemmed up their gods out of the sacrificial scenario and created a false transcendence (like I said before suddenly instead of being preoccupied with each other and then there is this crisis and then ... they are preoccupied with the gods). This is not what de Lubac is talking about. When he talks about mystery, he is talking about Real Transcendence. Just because the world is filled with false ones does not mean there isn’t a Real One. It just means we are hungry for it and we will fall for anything that simulates it. ...

Real knowledge requires transcendence now, because the other kind of knowledge was based on a false transcendence or else it has no transcendence at all and then it becomes mechanical. Enlightenment knowledge is basically mechanical knowledge, it appeals to no transcendence and therefore can work in a mundane order of things, but it cannot deal with the fundamental problem, which is our fallenness. We can take Enlightenment knowledge and crank it up as much as we can and it will create all kinds of breakthroughs, many advances in medicine and technologies, etc., etc., but it won’t do a thing about the fall because it has renounced any aspiration in that regard. But the knowledge that has something to do with the fall is going to be transcendence and it is going to require that we abide.

We fast-forward to the modern world where we increasingly say, ‘I cannot abide’ him or her, leaving more and more of us scandalized by the compulsive preoccupation with the other...

This has been a long way around to say that I invite everyone to the Emmaus Road Initiative (E.R.I.) of Gil Bailie and the Cornerstone Forum. I have found it to be a rock solid tool for reflection mixed with the Gospel and prayer - a tool right for Catholics to reclaim their spirituality and cultural distinction as well as this helps to build up the Church (you know that we Franciscans are into that). Check the times and places for the next E.R.I. near you and go to the website for E.R.I. sessions via CDs and audio files to discuss the material with others, enriching the experience and helping to pass on the faith.

Remember, "the unity for which Christ lived and died is not an abstract ideal. It is the result of hard work: suspending judgment, choosing others before self, forgiving, seeking reconciliation rather than nursing hurt pride. In other words, it requires that we die to self in Christ. The fruit? The blessing of God's peace!" -- Magnificat July 17, 2007

The picture is simply too big and ungainly for any of us to understand individually. For that reason persons choose whomever they feel or think they can trust to "make sense" of it all.

In my earliest days of attempts at "rational" thinking, I followed the wealth of "wisdom" (I'm joking, of course) from the pop music of the 60's and 70's. Most kids do the same, IMO, in their early teens.

Then during college, I knew better than to be fragmented by the conflicting and liberal ideologies swirling in the vortex there, so I settled for C. S. Lewis and Francis Sheaffer's approaches to Christianity.

It was only during my seminary days and Protestant ministry that I got truly carried off in the vortex, dabbling with Jungian psychology, New Age rubbish, Zen, and the like.

In these middle years (who am I kidding -- like I plan to live to 104?) grace brought me to Catholic truth via Gil Bailie, R. Girard, Walker Percy, the British Catholics, and the Magisterium of the Church. THESE are my hermeneutic guides, and I don't plan to change horses any further.

People in the West are hungering and thirsting for Truth. I would love to say someone is to blame -- the Church, catechesis, etc. -- for the sad state of things, but I can't. The thing to do now is to help right where I am; take responsibility for being a faithful, loving, steadfast witness in my quadrant and trust that Our Lord will help make up the difference, as well as can be done.

ERI is a superb tool for Mother Church, and Bailie a trustworthy guide. Your invitation, Aramis, is right on target.

And, we hope, the 3Ms are a little help too, should folk come visit us now and then ... Pax et bonum

Thank you for witnessing, my dear Athos. You provide for us a look into how easy we have all fallen into idolizing false gods, and I am no different.

But it has struck me recently that we are really challenged today to be "grounded in substance" - not only the Eucharist, of course that - but also a faith leading us into a new knowledge, for ourselves (if one is all caught up in their own salvation), but more importantly, and particularly if we view our connectedness through imitation and Girard's MT, for others.

As long as I can remember I have struggled with our violence and how true peace was a far-fetched dream. At an early age I was horrified and yet I identified with the violence. I could never separate human violence from myself, I had always known that it was apart of me and I was apart of it and if I were to understand violence (which also meant that I grew in a deeper appreciation of peace) I must see myself as an instrument for breaking the cycle of violence. Girard and MT provided me insight into mimesis and imitation and our connectedness to conflict and violence. MT showed me how we change this world - break the cycle of ressentement(sp?) and violence - one person at a time - till a small and yet at a critical mass, The Church, The Body of Christ is finally united in One. This is no pipe dream as the writing, that I used to end my post, from the Magnificat says.

MT makes it understandable. Now this knowledge does not necessarily bring about a flood of change - for it is only through faith, Christian conversion, metanoia that leads to this change, but this should not hinder us from doing what we can do to make Christian conversion intelligible.

A grounding in this understanding, in my humble opinion is what Christian anthropology through the lens of MT will help The Church grow deeper roots as well as to grow its vines to spread further. This of course after the necessary pruning that we must endure time after time. So Porthos, suffering is not separate from MT, but we may need to pray on it some more as well as we may need to work on making it more intelligible (but my point is that I think it is all there).

Hey, that illustration is for Edgar Allen Poe's "The Maelstrom," I think. I may possibly have written the best paper on that tale (well, an American lit. prof. friend who read it told me so, anyway), published in a land far, far away, in an obscure journal that no-one will ever read.

Which is itself kind of poetic!

"The Descent into the Maelstrom" was the full title I think.