Through It All - Christ is Our Hope 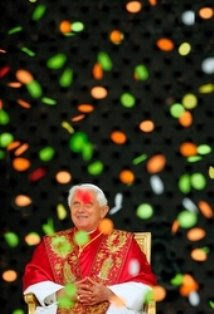 Only when the future is certain as a positive reality does it become possible to live the present as well.

In "Spe Salvi - in hope we were saved" Pope Benedict XVI provides us a glimpse into the only possible future we have - a future built in Christian hope.

In this encyclical on hope Pope Benedict XVI notes that St.Paul reminded the Ehpesians (Eph 2:12) that "before their encounter with Christ they were ‘without hope and without God in the world.'" (On Christian Hope, #2). Pope Benedict goes on to stress:

Only when the future is certain as a positive reality does it become possible to live the present as well. So now we can say: Christianity was not only "good news" --- the communication of a hitherto unknown content. In our language we would say: the Christian message was not only "informative" but "performative."

That means: the Gospel is not merely a communication of things that can be known---it is one that makes things happen and is life-changing. The dark door of time, of the future, has been thrown open. The one who has hope lives differently; the one who hopes has been granted the gift of a new life.

+ + +
Over the weekend I listened to 4 top graduating seniors from one of our public high schools and each spoke about living in the "now" - giving almost no reference to what kind of future there may be waiting for them. It was as if they were acknowledging the lurking "dark door of time, of the future" and so their advice was that you better enjoy what you have while you can.
It has been 8 years since I last attended a graduation ceremony. I know that they usually include a lot of hooping 'n hollering and a big beach ball tossed among the graduates getting all psyched for party-time, however, as I remember, in the celebration there would be some reference made to the challenge and hope in the future...not so much here. I wondered if this was so because it was a public high school with guidelines prohibiting the expression of faith, as it has become more and more apparent that true hope can only come from faith.

"Here too we see as a distinguishing mark of Christians the fact that they have a future: it is not that they know the details of what awaits them, but they know in general terms that their life will not end in emptiness. Only when the future is certain as a positive reality does it become possible to live the present as well."

Let us remember to imitate Mary's YES and the YES of Jesus Christ to live in the fullness of this new life - being models of this life-changing hope for others.

Posted by David Nybakke at 4:31 PM

I'm glad you posted this, Aramis. I want to say that when I felt least hopeful, shall we say, after my surgery, I plunged into the Holy Father's Jesus of Nazareth, drinking the fine wine of BXVI's scholarly yet pastoral prose. Just the thing for someone heavily dosed on Percocet and feeling decidedly hemmed in.

I have Spe Salvi and am saving it - why? Because in July I'll have my 3 mo. check and it is my kind of "Break in case of bad news" back up.

Ain't it great going directly from a "Be Not Afraid" pope to a "Be of Good Hope" pope?

It is hope,
hope, not in the news of the check-up, but hope in the fullness of life promised and given to us.

It will be good news in July. I know it.

I am just concluding "Called to Communion" and find him amazing.

Here, I struggle with how other Catholics and most all Protestants do not share in the fullness of Love, Faith and Hope simply because they allow themselves to be caught up in the shallowness and distractions of this world. This, I believe is our biggest challenge, to surrender to the Will of the Trinitarian Father so He can orchestrate the dance - the movement toward unification of the Body of Christ.

I feel that Pope B16 is a great and gifted conductor and one that will help lead the Church in this necessary re-building up of the Body of Christ.

The young and impressionable are overwhelmed by a decidedly anti Culture of Life candidate merely out of rejection of what they perceive as the current patriarchal administration. They want to "put it to the man."

What they don't see and can't see is that this is "satan casting out satan" in a new guise, with new feathers. Alas.

I will hope with you that July brings good "scopic" news, Aramis. Cheers