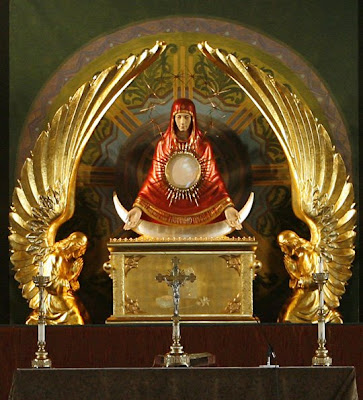 Calls for a ROAD TRIP click here for map
CHICAGO (CNS) -- Nine years of prayer, work and faith culminated May 31 when curtains parted in the sanctuary of St. Stanislaus Kostka Church in Chicago to reveal an iconic monstrance of Our Lady of the Sign, Ark of Mercy.

It's just the beginning, however, of what will be the Sanctuary of Divine Mercy, the official shrine to the Divine Mercy devotion in Chicago.

Cardinal Francis E. George of Chicago was on hand to celebrate Mass and bless the new 9-foot, hand-carved and painted monstrance featuring Mary atop a gold-leaf decorated ark flanked by two kneeling angels, also in gold leaf, whose wings extend to shelter her. The 12-inch host, which had to be specially made for the monstrance, is encased in Mary's center. 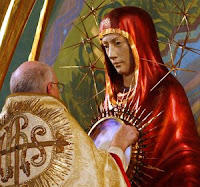 Deacon Michael McCloskey of Holy Name Cathedral places the 12-inch consecrated host in an iconic monstrance of Our Lady of the Sign, Ark of Mercy, at St. Stanislaus Kostka Church in Chicago May 31. The nine-foot high, hand-carved and decorated monstrance is believed to be the largest in the world.

The entire project for the monstrance and the future sanctuary -- which will be built between the church and school -- came out of a message from Mary that Father Bus writes about in "A Mother's Plea." He said Mary asked him to dedicate the parish to her; at the time St. Stanislaus was in poor shape. The building was in disrepair and the neighborhood poor.

"We're walking on faith," said Father Bus in a recent interview with the Catholic New World. Elizabeth Murray came from St. Vincent Ferrer Parish in River Forest to see the unveiling of the monstrance. She said she's moved by what is going on at St. Stanislaus and the work of Father Bus."

"I think he's encouraging people to have a devotion to the Divine Mercy. It's inspiring," said Murray.

Michael Kendall sees the monstrance and sanctuary as part of a reawakening in the Catholic Church since the Second Vatican Council.

"It's my hope that in 200 or 300 years that historians will look back at this time of awakening in the Catholic Church and say St. Stanislaus Kostka had a significant role to play in bringing about this great Catholic awakening," said Kendall, who took a 50 percent pay cut to come and work part time as director of mission advancement for the Sanctuary of the Divine Mercy. He said he also hopes that people drawn to the monstrance will see that true beauty lies with Jesus in the Eucharist and that Christ can heal their pain.
Posted by David Nybakke at 12:12 PM