Feast Day of Saint Anthony - Doctor of the Church

Francis and Anthony - Interesting images looking in a mirror.


Both men loved the hermit life; neither had much chance to savor it. Thomas Celano, early biographer of Francis, writes: “Francis was often suspended in such sweetness of contemplation that, caught up out of himself, he could not reveal what he had experienced because it went beyond all human comprehension.” He was often taxed, however, by the demands of leading his fledgling religious order—and observing canonical requirements such as writing a rule.

Anthony had about one year as a hermit at Monte Paolo near Forli, Italy, before his public gifts were discovered. Near his death, he tried again for the quiet life, but even from his refuge in a walnut tree, people sought him out for counsel and confession.

Both saints had a strong sense of place. Francis felt especially drawn to Mt. LaVerna; Anthony requested a refuge in a tree at Camposampiero. Yet, when Sister Death was approaching, both men longed to be “home.”

To read each of these saint’s written words is to reread the Bible, particularly the Gospels. To follow each man’s footsteps—and the message of each man’s actions—is to be on the path of Christ. Francis and Anthony are alike because they were shaped by the words and actions of Jesus. 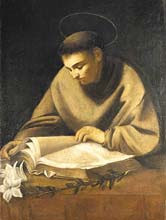 Life of St. Anthony of Padua


He went to the little friary in Coimbra and said, “Brother, I would gladly put on the habit of your Order if you would promise to send me as soon as possible to the land of the Saracens, that I may gain the crown of the holy martyrs.” After some challenges from the prior of the Augustinians, he was allowed to leave that priory and receive the Franciscan habit, taking the name Anthony.
True to their promise, the Franciscans allowed Anthony to go to Morocco, to be a witness for Christ, and a martyr as well. But, as often happens, the gift he wanted to give was not the gift that was to be asked of him. He became seriously ill, and after several months realized he had to go home.

Read more on Saint Anthony and how he got the label Hammer of Heretics with his firm stance against heresy by a strong yet embracing teaching toward truth.

And read more on St. Francis of Assisi: Not a Birkenstock-Clad Hippie But a Converter of Muslims An Interview Frank Rega, author of St. Francis and the Conversion of the Muslims.

And check out Vive Christus Rex! blog for a few more facts on Saint Anthony.
Posted by David Nybakke at 10:02 AM

The reason St. Anthony became a Franciscan was his viewing the relics of the recently martyred five Franciscans, whose remains were taken to Portugal. They are remembered as St. Berard and His Companions. Read more here: www.frankrega.com

Thank you Frank for your visit and comment. I really appreciate your St Francis of Assisi and the Conversion of the Muslims book.

If anyone wants more information about Frank Rega, the author please visit his site here.

Just ordered St Francis of Assisi and the Conversion of the Muslims and am greatly anticipating its arrival. I'll save it for reading as we travel to IN and IL, Aramis. See you soon! Cheers