Be Not Tempted to Despair 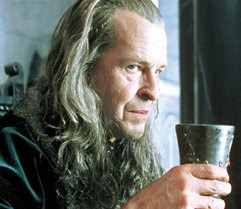 It seems to me that people of Christian faith in our time, in our age, are tempted to fall into the bane of Denethor, Steward of Gondor in J. R. R. Tolkien's Lord of the Rings. (Pictured above in Peter Jackson's version and played so well by John Noble.)

At an unparalleled degree Christians in the West feel pummeled by attack after attack: our faith is scoffed at by pretentious scholars and celebrities (those famous for being well-known); our morals flaunted by individualists run amok and negative imitators who are caught in a state of scandal, both of whom are lauded by journalists; and a separatist religion of the Scimitar whose rivalry toward Judaism and Catholicism knows no boundary.

We look in our "palantir" - internet, cable television, advertisements with shreds of "news" - and we feel driven to believe falsely that hope for all that is good, true, and beautiful in our world is on the wane, capsizing, or being deconstructed.

But I know differently. I have for the past seven years been privileged to be a part of an endeavor that will eternally give me hope. I have taught in a Catholic School. I have been surrounded by colleagues and friends who hear the sound of bugles at dawn and see the bright dawning of an eschatological sunrise. And during my six-week long recuperation, I have felt the power of their prayers and intentions for me, for my students whom I abandoned through no fault of my willing (unless a "transitional cell carcinoma" was willed by me somehow), and for the good of Catholic education.

Governments, nations, political parties, caucuses, and special interests can and will disappoint being merely human groupings. But the Catholic Church - of whom we would ALL be a part 1,500 years ago - was begun by Our Lord, is sustained by Our Lord, and is promised to continue by Our Lord ... until He comes again (Mtt 16,18 & 28,20) come hell or high waters.

So, do not fall for the deceptions of "Sauron" or "Sarumens" who are legion, gentle reader. Keep your armor polished and your sword sharpened. Stand tall and join the merry revels and rejoicing of the glad Company who know by His Real Presence among us that we are a part of the Body of Christ. There is no darkness that can keep our heart and voice from singing. We are the King's men (and women), and we pledge our fealty to Him.
Posted by Athos at 3:14 PM

Be not tempted to despair…

Yes, dear Athos, this line of yours was the first I read when opening my computer today at noon.
I was badly in need of it. Nothing quite serious. Just a moment of real temptation. And of that community of Catholics who pray for each other as your students have done for you. It was a sign from God, believe me. Like a word out of the Gospel that conveys a message from God in the right moment. Because in Europe, concretely in Portugal, faith and communities of faith are much more virtual than the ‘virtual’ communication I have with you ‘massketeers’ (for instance; there is Dawn Eden, Gil Bailie and a few others…).
But, good news: you are in my prayer, you have always been specially since this ‘enemy cancer’ attacked you ‘thinking’ that the victory was gained. No it’s not.
I’m glad that once in heaven (I hope for all of us) a certain Athos, an Aramis and some important ‘others’, we will rejoice for those precious messages we sent to one another when apparently we were so distant, so ‘unacquainted’ I would say.
Pardon my bad English.
Thank you so much. Keep on and God bless
Carmo

Oddly (or perhaps not), I felt led to ask Dawn to read this post after I watched her post of Archbishop Fulton Sheen on the Our Father, which speaks about not falling into despair.

He says in the video that if a message is of the Holy Spirit it is never one of despair.

It is a blessing to be a blessing on occasion. Thank you so much for your prayer, Carmo; your medical background helps such prayer be very specific!

I was pointed to this post by Dawn Eden's blog and it is rather timely in my life, as I am re-reading the Lord of the Rings trilogy. I just finished the episode in which Denethor meets his demise in despair, and it also struck me how poignant that story is in today's world, and really, for all time. (The trilogy's timeless quality is what makes it so beautiful!)

I think this counsel that Gandalf gives later in The Return of the King, after the battle on the field before Minas Tirith is a great follow up to your post and applies to Christians in every walk of life:

"Other evils there are that may come; for Sauron is himself but a servant or emissary. Yet it is not our part to master all the tides of the world, but to do what is in us for the succor of those years wherein we are set, uprooting the evil in the fields that we know, so that those who live after may have clean earth to till. What weather they shall have is not ours to rule."