Excerpts from Asia Times: "What seems to the West a low-key appeal to reason and Western norms of religious freedom...looks like a Trojan Horse to Muslims. Islamic leaders already have noted that months before [Magdi] Allam's baptism, the Vatican published a "doctrinal note" on evangelization that specifically repudiates the notion that Catholics should refrain from attempting to convert people of other faiths." 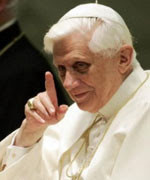 "As [Jesuit] Father Dall'Oglio warns darkly, Muslims are in dialogue with a pope who evidently does not merely want to exchange pleasantries about coexistence, but to convert them. This no doubt will offend Muslim sensibilities, but Muslim leaders are well-advised to remain on good terms with Benedict XVI. Worse things await them."

The post concludes with: "The European Church may be weak, but no weaker, perhaps, than in the 8th century after the depopulation of Europe and the fall of Rome. An evangelizing European Church might yet repopulate Europe with new Christians as it did more than a millennium ago. "

More reading: Wouldn't it be obvious that true Christians would want all people to know the truth?

* * *
From an interview with Frank Rega: LifeSiteNews: What can St. Francis teach Christians of today about relating to Muslims? 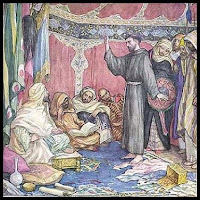 Frank Rega: First, I think it is important to realize that St. Francis did not openly attack the Muslim religion or Mohammed. He was not armed with a copy of the Koran in one hand and the Catholic Catechism in the other. In fact there is no indication that he ever instructed his friars who undertook such a mission to study the Koran or the tenets of Islam. His goal was to carry to the unbelievers the very presence of Christ, and the essence of God's love, mercy, forgiveness and salvation.

This brings up a second point, the necessity to be strong in the basics of our Faith. One cannot relate as a Catholic to another religion while being hesitant, for example, about the truth of Christ's Resurrection from the dead on Easter.

Finally, Francis shows us that we must keep it simple. Simplicity was one of the hallmarks of his personality and of his approach to Christianity. Spiritual strength flows from the simple understanding and belief that Jesus is God, that he founded a Church to transmit the grace of salvation in His Name, and that Church is the Roman Catholic Church.

I conclude with this post from Real Clear Religion, although Francis was not on a formal mission of peace, converting the muslims was his attempt to bring about peace. According to one scholar, Christopher Maier, "Francis like the crusaders wanted to liberate the holy places of Palestine from Muslim rule. What was different was his strategy...He wanted their total submission to the Christian faith."

Posted by David Nybakke at 5:22 PM