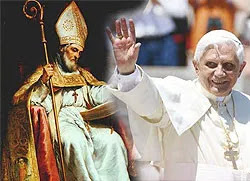 Vatican City, Jun 18, 2008 / 09:49 am (CNA).- Pope Benedict XVI greeted thousands of pilgrims gathered under a warm Roman sun in St. Peter’s Square on Wednesday. In his address, the Pope focused on how Christians must live out their faith by uniting contemplation with action.

Continuing his catechetical series on ancient figures in the Church, the Pope turned his attention to the St. Isidore of Seville, the brother of Saint Leander and a contemporary and friend of Saint Gregory the Great.

Isidore, under his brother's guidance, became disciplined and studious. Their house had a large library of pagan and Christian works, and hence Isidore's writings "reveal an encyclopedic knowledge of classical pagan culture as well as a profound understanding of Christian culture."

The Holy Father also noted that St. Isidore lived during the Visigothic invasions of Spain, devoted much energy to converting the barbarian tribes from heresy and preserving the best fruits of classical and Christian culture.

Despite the tendency to think of ancient writings as irrelevant to modern society, Pope Benedict said Saint Isidore’s reflections, which "gather and express the full Christian life,” are still valid today.

Isidore worked to bring the richness of pagan, Jewish and Christian learning to the rapidly changing political, social and religious situations in which he lived.