What AM I Looking At? 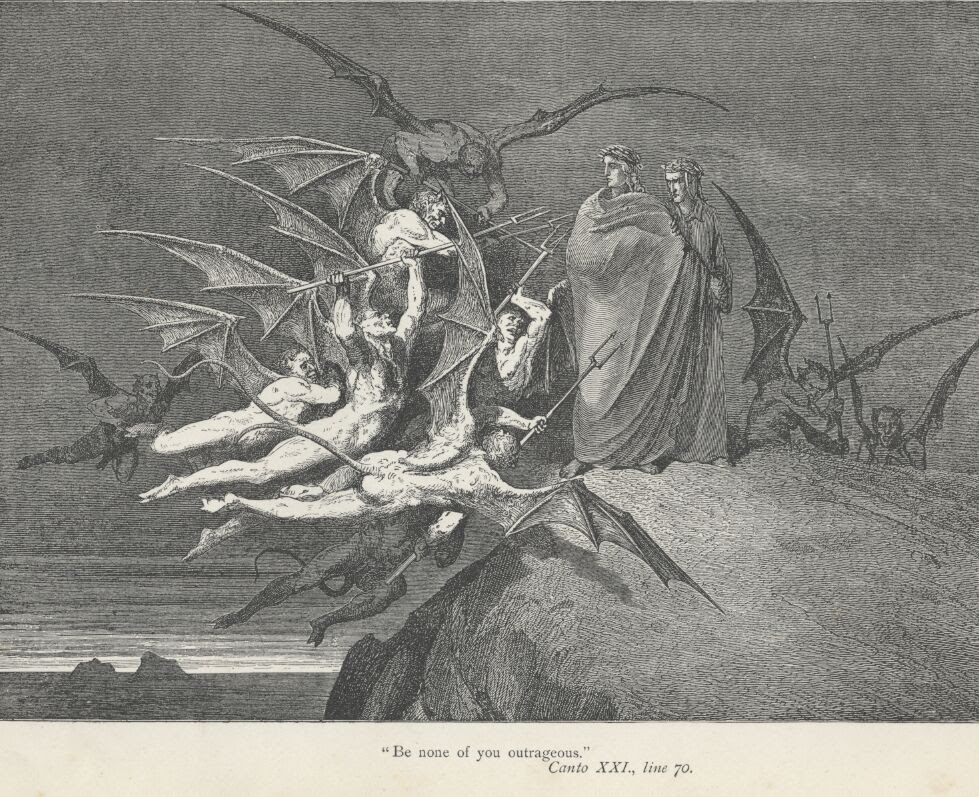 Since Aramis and I are wending our way through Hell with Dante and Virgil via Gil Bailie's taped lecture commentary series, we see here the work of probably the most celebrated illustrator of The Divine Comedy, Gustav Doré.

The most popular and successful French book illustrator of the mid 19th century. Doré became very widely known for his illustrations to such books as Dante's Inferno (1861), Don Quixote (1862), and the Bible (1866), and he helped to give European currency to the illustrated book of large . He was so prolific that at one time he employed more than forty blockcutters. His work is characterized by a rather naïve but highly spirited love of the grotesque and represents a commercialization of the Romantic taste for the bizarre. Drawings of London done in 1869-71 were more sober studies of the poorer quarters of the city and captured the attention of van Gogh. In the 1870s he also took up painting (doing some large and ambitions religious works) and sculpture (the monument to the dramatist and novelist Alexander Dumas in the Place Malesherbes in Paris, erected in 1883, is his work).
Posted by Athos at 10:07 PM

You took down the enigma picture. What WAS that?

Have you gotten to tape 7 in the Dante series? I think that whatever he says here is what I have been trying to say about "manly-men" programs of warriors and kings and lovers and leaders, etc... Final participation vs. original participation. Not that the "symbol" is worthless, but it is not the real thing. So the program is not the real thing -- YOU, Athos is the real thing when it comes to the youth that you guide, instruct and educate. It is having the eyes of Beatrice, that when one looks into her eyes they see the eagle/lion reflected back. Our youth cannot be in better hands then yours. And as Bailie concludes tape 7 -- everything comes back to the Eucharist.

Porthos: I'm sending you an email re: The Enigma, tho' 'tain't much.

Aramis: You are kind. The best I can do is show them how when I fail and fall short of the mark I can try to stand up, make amends, and begin again.

As per/your comment on the Eucharist, here is dear JRRT to his son (1941):

"Out of the darkness of my life, so much frustrated, I put before you the one great thing to love on earth: the Blessed Sacrament ... There you will find romance, glory, honour, fidelity, and the true way of all your loves upon earth, and more than that: Death: by the divine paradox, that which ends life, and demands the surrender of all, and yet by the taste (or foretaste) of which alone can what you seek in your earthly relationships (love, faithfulness, joy) be maintained, or take on that complexion of reality, of eternal endurance, which every man's heart desires."

And what about this wide-eyed strange (or ‘when eyelids meet’) notion that only through commitment is the greatest intimacy found. Now, if only our men’s programs would have THAT as their center.

I don't do sentence diagraming. But I like British writers and their piled on sentences!