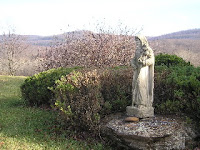 Near the 'canonical' end of The Dionysus Mandate [Ch. 18], the protagonist, Aly Lambert, goes to visit her spiritual director at an abbey.

Aly drove up the hill to the entrance of the Abbey. Two pillars of native riverbed rocks stood on either side of the entrance to the long and winding stretch of road leading to the monastery. Farmland and a grazing herd of cattle lined either side of this parcel of land west of the Blue Ridge mountains and Shenandoah River.

Father Gabriel was waiting for her in the Guesthouse’s conference room. Aly waved to the Guestmaster, Brother Stephen, who stood under the eaves waiting to greet her. He was used to seeing Aly’s old car arrive here for her monthly time with Father Gabriel. He smiled down at her from his six foot three frame and took her in with his gaunt eyes.

“Haven’t seen you in these parts for quite awhile,” he said smiling. “Skipped a time or two, didn’t you?”

“A lot going on, Brother Steve.”

“Always is.” He looked down at a cat rubbing against his leg. “Father Gabriel’s inside.”

After their hour session Aly drove back on Route 50 toward her apartment in the District. She pondered Father Gabriel’s parting words to her.

“Remember, Aly. If you choose an active revolt against Dionysus, you will be hunted and ultimately found. If so, you may very well become a Dionysus victim yourself.

“Yet I have many friends,” he said. “Among Trappists, Franciscans, Dominicans, Youth Apostles ... They will be happy to give you shelter and safe haven any way they can do so. In Italy, the Balkans, Lebanon, France, Israel, here. There won’t be any place that is really safe, however. This will be a dangerous path, Aly.”

The two monks depicted in this excerpt are two actual residents at the monastery at which I try to go on retreat at least twice a year. Brother Steve is the Guestmaster and loves his feline companions, and Father 'Gabriel' is Father [/medical doctor/poet] Mark. Both are faithful to their monastic vows of chastity, poverty, and stability for these many decades. Yet, like the confidant of Aly Lambert, above, these Trappist monks are astonishingly in touch with the world for which they pray through the Psalter and liturgical hours. Father Mark is one of the most knowledgeable readers of René Girard of my acquaintance. He knows the ins and outs of mimesis, desire, sacrifice, and redemption. His smile welcomes one into a collaboration of prayer, reason, faith, and compassion in and for a fallen world.

Cast far from your mind images of morose cowled monks hiding behind the cloister walls. We live and move supported by the "dynamos of prayer" that are Catholic monasteries and convents. And if I were in Aly Lambert's shoes, I, too, would rush to the abbey for sound spiritual direction on rebelling against the Generative Mimetic Scapegoating Mechanism [Hamerton-Kelly]. The contemplatives are thinking hearts and the leaven in the loaf of the Church. We are fortunate for their lives of work and prayer.
Posted by Athos at 3:34 PM

Meanwhile, outside the monastic gates the sacrificial preparation goes on apace ...

And a really good reason to pray (and hope that Russian intelligence is wrong).

And for the finest in breezy gnostic designer-pagan-religions (the grandkids will be setting sleeping streetpeople on fire), the suburban witches form their own ”Spiral Scouts”. Proof of that allusive Chesterton quotation: "If people won't believe in God, they will believe anything."