The Sacrifice, a Eucharistic or Dionysus Mandate? 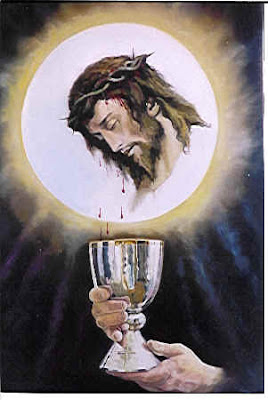 Athos mentioned the absolutely great tape made by Gil Bailie, "Entering the Biblical Story at the Eucharistic Table." Here is an excerpt from the conclusion of that talk. I think it stands as a relief to the wonderful glimpse we are getting from Athos' book, Dionysus Mandate.

Then there is a little passage of a book on Revelation by William Riley, Irish Biblical scholar who passed away a few years ago that I would like to leave you with. He has a wonderful way of helping understand our work in the church and it also comes out of our Eucharistic Mandate. He says that Christ often calls us to failure, not success just as He Himself was called to the Cross. “The marvelous religion teacher, the hard working bishop who manages his diocese well, the mother of a family strongly rooted in the faith have done no more works than the dedicated religion teacher whose classroom is like a drudgery, or the zealous and caring bishop whose administration is constantly criticized or the loving mother whose family, despite her efforts, have all abandoned the Church. In many ways the last three have received a higher calling.” Isn’t that amazing? We are called to move into that place of brokenness and to take up our cross. And to do it in such a way that the world hears the cock crow, and that the world feels the forgiveness of God. And that the world recognizes that we are not doing it on our own, or that we are not doing it because we are nice, or morally superior. We are doing it because Christ has laid His Hand on us.

A side comment: In the quote above, he tells of the calling one receives. Well this implies that one is open and receptive to receiving the call. I look at all the distractions in our world, many of which go to the extreme, and realize just how hard it is for anyone today to hear their calling -- resulting in what Athos has coined, Distracted to Death... So even if one does go to Mass, without the extreme surrendering, or death of 'self', at the Mass, one will likely leave the service unprotected - clinging to the false sense of 'self' - venturing into distractions of death.
Posted by David Nybakke at 12:58 PM

So even if one does go to Mass, without the extreme surrendering, or death of 'self', at the Mass, one will likely leave the service unprotected - clinging to the false sense of 'self' - venturing into distractions of death

Which is why the Paraklete uses such devices as illness, loss, or other calamities to try to get our attention. Often it is only when the Spirit employed a 2 x 4 could I hear what I was supposed to hear. Gratitude sometimes came only much later on.

AND what a nice juxtaposition, Aramis ... Eucharistic Mandate indeed! After reading The Dionysus Mandate, one may feel the need to go first to Confession before fulfilling one's eucharistic mandate!