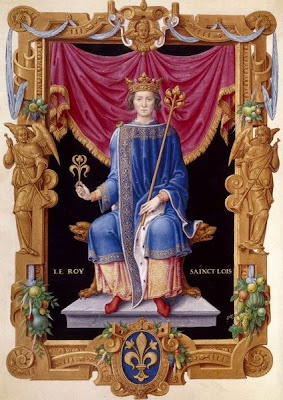 Saint Louis IX patron saint of the Secular Franciscan Order (See link and scroll down to 8.24)

A just king rules the earth
My dearest son, my first instruction is that you should love the Lord your God with all your heart and all your strength. Without this there is no salvation. Keep yourself, my son, from everything that you know displeases God, that is to say, from every mortal sin. You should permit yourself to be tormented by every kind of martyrdom before you would allow yourself to commit a mortal sin.
If the Lord has permitted you to have some trial, bear it willingly and with gratitude, considering that it has happened for your good and that perhaps you well deserved it. If the Lord bestows upon you any kind of prosperity, thank him humbly and see that you become no worse for it, either through vain pride or anything else, because you ought not to oppose God or offend him in the matter of his gifts.
Listen to the divine office with pleasure and devotion. As long as you are in church, be careful not to let your eyes wander and not to speak empty words, but pray to the Lord devoutly, either aloud or with the interior prayer of the heart.
Be kindhearted to the poor, the unfortunate and the afflicted. Give them as much help and consolation as you can. Thank God for all the benefits he has bestowed upon you, that you may be worthy to receive greater. Be just to your subjects, swaying neither to right nor left, but holding the line of justice. Always side with the poor rather that with the rich, until you are certain of the truth. See that all your subjects live in justice and peace, but especially those who have ecclesiastical rank and who belong to religious orders.
Be devout and obedient to our mother the Church of Rome and the Supreme Pontiff as your spiritual father. Work to remove all sin from your land, particularly blasphemies and heresies.
In conclusion, dearest son, I give you every blessing that a loving father can give a son. May the three Persons of the Holy Trinity and all the saints protect you from every evil. And may the Lord give you the grace to do his will so that he may be served and honored through you, that in the next life we may together come to see him, love him and praise him unceasingly. Amen.
(read his Last Instructions to his eldest son Phillip by scrolling down at this LINK)

His friend and biographer, the Sieur de Joinville, who accompanied him on his first crusade to the Holy Land, relates that the King once asked him, "What is God?" Joinville replied, "Sire, it is that which is so good that there can be nothing better." "Well," said the King, "now tell me, would You rather be a leper or commit a mortal sin?" The spectacle of the wretched lepers who wandered along the highways of medieval Europe might well have prompted a sensitive conscience to ask such a question. "I would rather commit thirty mortal sins," answered Joinville, in all candor, "than be a leper." Louis expostulated with him earnestly for making such a reply. "When a man dies," he said, "he is healed of leprosy in his body; but when a man who has committed a mortal sin dies he cannot know of a certainty that he has in his lifetime repented in such sort that God has forgiven him; wherefore he must stand in great fear lest that leprosy of sin last as long as God is in Paradise."
The Histoire de France (c. 1750) records that the saint showed that “it is not impossible to ally the majesty of the throne with the holiness of the Gospel, that without quitting the most exalted rank, one may practice the humiliations of penitence, that a really Christian king renders his greatness independent of events, and fears not to lose through adversity what prosperity could not have accorded him.”
To learn more on the Secular Franciscan Order (SFO) link to a previous post HERE.
Posted by David Nybakke at 9:03 AM