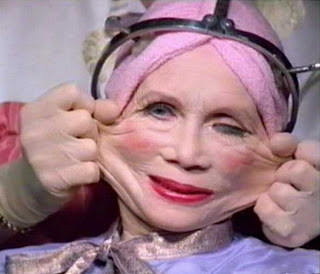 Don’t hate me because I’m beautiful

And you were beginning to think that the tide of human hubris could rise no higher, eh? Well, as we say in the Midwest, take a gander at the following:

London, England (LifeNews.com) -- Women from around the world are traveling to clinics in various locations that are now offering face lifts and cosmetic surgery using tissue from babies who have been killed by abortions.

Pro-life advocates are strongly condemning the practice and saying the taking of human life is never warranted -- especially for such a self-serving purpose.

Women like Susan Barrington, a 52-year-old housewife from England, are heading to places such as Barbados, the Dominican Republic, Moscow and Rotterdam to obtain the treatments.

She has been given the final go-ahead form a local clinic to travel abroad for the treatment that promises to make her look 10 years younger and doesn't mind that lives have been sacrificed to enhance her beauty.

To produce the treatments, clinics are using tissue from babies killed in abortions from 6 to 12 weeks into pregnancy and stem cells obtained from destroying human embryos to inject into a client's face. The fetal cells then begin a supposed rejuvenation process that makes the skin look younger.

To obtain the cells, women in underdeveloped nations are paid up to $200 dollars to carry a baby up to the optimum eight to 12 week period when the fetuses are “harvested” for their stem cells which are then sold to exclusive cosmetic clinics. More>>

What Terry Gilliam's 1985 film, Brazil, so precociously foresaw was our present mimetic swirl of terrorism, bureaucracy run amok, human hubris, alchemical fusion of paganism and western rationalism, and a suffocating attempt of nearly everybody to get out of it (unsuccessfully).

Want to know how to find peace, joy, and holiness? Inquire within..
Posted by Athos at 5:51 AM

Brazil is an amazing movie, and prescient, as you point out.