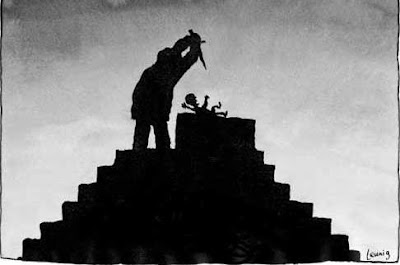 Michael Leunig's Leadership Political Cartoon
Obama lifts Bush restrictions on embryonic stem cell research
"As a person of faith, I believe we are called to care for each other and work to ease human suffering. I believe we have been given the capacity and will to pursue this research* -- and the humanity and conscience to do so responsibly."

"We will lift the ban on federal funding for promising embryonic stem cell research," Obama said to vigorous applause at a White House gathering.

"We will also vigorously support scientists who pursue this research. And we will aim for America to lead the world in the discoveries it one day may yield."

Shares of companies specializing in stem cell research burst upward on the news, with Geron Corp up by as much as much as 35 percent and StemCells Inc up 73 percent at one point. Other related company shares rose, too.

* (my comment) Obama's Will-to-pursue is the new way of saying Nietzsche's will-to-power and as "René Girard has shown us what the god-making laboratory looks like. It looks like Golgotha, but one that ends, not with the realization of the victim’s innocence and the dispersal of the confounded mob, but with the mob’s celebration of its victory in a holy cause." This is the age of 'deliberate barbarism'.
Posted by David Nybakke at 12:40 PM

The WaPo reports today, — Pledging that his administration will “make scientific decisions based on facts, not ideology,” President Obama on Monday lifted the Bush administration’s strict limits on human embryonic stem cell research.

(a) Such "scientific decisions" are balderdash trash-science decisions. Science cannot, will not make value judgments per se by definition. To say otherwise as the Big O has is, by definition, ideological, not scientific.

(b) No useful leads have come to date from embryonic cannibalism stem cell research.

(c) The Catholic Church is not against stem cell per se; only embryonic stem cell research. The decision to carry out such research by this administration is an ideologically driven one, driving a stake into the heart of human respect and dignity, a move of the strong against the defenseless, a murderous step that will lead, if not checked and reversed, further into the vortex of the sacred. Alas.

Probably the best summary of the abomination here.

The sad and the sick of it all, but hey look, from the side of the coin that those siding with the ‘man-of-faith in the almighty dollar’ I think he sees us and all the Catholic right-to-life people as simply blinded by some irrelevant myth (religion is just a drug anyway). He can’t understand why you don’t see that signing this Executive Order is another great advancement of his stimulus plan (didn’t you read the article?):

“Shares of companies specializing in stem cell research burst upward on the news, with Geron Corp up by as much as much as 35 percent and StemCells Inc up 73 percent at one point. Other related company shares rose, too.”

Tell me of an industry that is showing any growth let alone increases like this. It’s not about life but about jobs. Economics, my dear Athos, economics will get us through, they claim.

(Read post on) "The consumer society, because it renders objects (this includes embryos) available, at the same time also makes them eventually undesirable, working towards its own 'consumption'. Like all sacrificial solutions, the consumer society needs to reinvent itself periodically. It needs to dispose of more and more commodities in order to survive."

Moreover, the market society begins to mirror primitive societies as it devours its victims at higher and higher levels.

Please, PLEASE know that this comment is intended to be a slam against the signing of this Executive Order.

Trouble is that we take religious and moral issues very seriously and primary - the other side flips this all aside - banking on the consumer society to once again rise up in glory to lead us to victory and prosperity.