Be a Joiner PlaySet 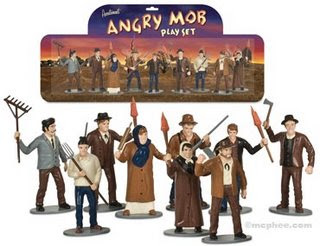 Hey kids! It's time to work yourself - and, of course, others, silly! - into an angry mob!

Think you're not a joiner? Didn't get on the Big O Bandwagon in the fall? So what?

Haven't you wanted to lower your level of consciousness and become part of a whole greater than the sum of its parts, just like those cartoon-protesting, church-burning, victim-seeking hoards in picturesque, exotic places (like London and Minneapolis)? Well, now you can!

But wait! There's more! Buy an 'angry mob' set (pictured above) for your favorite nephews or nieces. It's never too early to start practicing!
Posted by Athos at 6:20 AM