How would you know evil in today's world?

from Jennifer F. at Conversion Diary

How would you know? (click here to read more)

What litmus test could you offer that would apply to all places and all times as a way for a person to look around themselves with completely clear eyes, piercing through even the thickest fog of self-delusion and widespread cultural acceptance, and see that they are surrounded by grave evil? Is there any simple way for a person to immediately undergo an earth-rocking paradigm shift in which they look up and realize that the world around them is not what they thought it was?

One thing that stands out in all these examples is that the victims of the widespread evil were categorized as something less than human.

Every decade or so, take a look around the society in which you live, and ask yourself if there is any group of human beings who are seen as something less than human. A big tipoff is if dehumanizing words -- terms other than "man," "woman," "child," "baby," or "person" -- are used to describe any category of people.

And if you ever see that going on, you might be in the midst of something gravely evil. 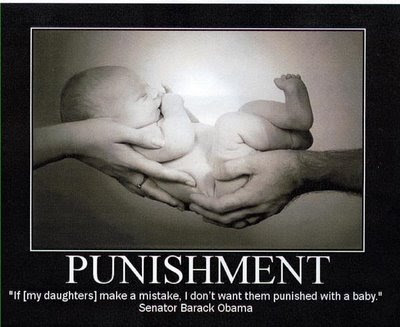 One strange reaction (at least to me) that Jennifer received in her post centered on an idea that within evil there is some sort of hierarchical structure - as if one act of evil could be more evil than another. In answering one such comment Jen writes: "My point was not that abortion is the exact same thing as the Holocaust, but that both are in a special category of evil that you only see when a group of people are considered less than human." Another person commented simply that: "Evil is evil - there are not varying degrees. Just like you can't be kinda pregnant."

We must remember** to keep and be active in our faith for the victory over evil was accomplished at the Cross our task is to live in the light of the victory.

* * In his book, Violence Unveiled: Humanity at the Crossroads, Gil Bailie makes the point that 'alethia', the Greek for 'truth', is a compound word: a-(not) + -lethia (forget). Here, truth is literally rooted in remembrance. We need to be vigilant about those determined to silence the voices of memory, especially when it involves muting victims when they give voice to memory.

Posted by David Nybakke at 4:11 PM