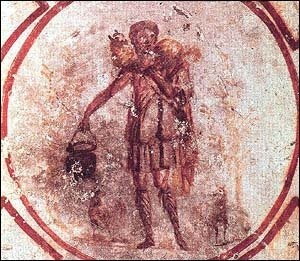 If this took place to strategize about this, then perhaps discussion can finally be brought out into the open about the degenerate (literally) and aberrant sexual practices born of fallen human nature.

But my hunch is that like the early Christians in the catacombs, or English Catholics during Cecil/Lord Burleigh's tightening noose (or fictionally, the "Old Narnians" during the Telmarines' reign in Lewis' Prince Caspian), this will become yet another episode in the sad history of conventional culture in which those who oppose such deviancy in the name of Natural Law and revealed truth will become victim fodder for the sacrificial mechanism of the on-coming neo-pagan revival under the cloak of "enlightened" pragmatism.

Addendum: The deuced thing about the sacred, as R. Girard has explicated, is its power to hem in and seem a masterful and conspiratorial thing. It is hardly so; rather, a clumsy, unconscious thing that overpowers humans with character disorders and hubris aplenty.

If and when push comes to shove in the above matter, members of the Catholic Church and all Christians downstream of her would do well to begin to mimic our elder brothers in the biblical faith, the Jews, and let the pagans wreak their own havoc. But marriage, the family, and the Church should be inviolable and precious; precious as the Magisterium vouchsafed to us.
Posted by Athos at 8:11 PM