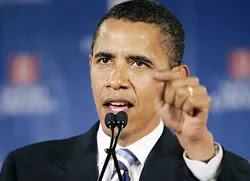 Borrowing the phrase "luciferian logic" from mentor and friend Gil Bailie, I post this from the honorable Senator Barack Obama, who says that A domestic terrorist is like pro-life Senator. Mark Shea would place this kind of thinking in the "Sin makes you stupid" category. While Shea is correct, Obama's statement also displays the way the sacrificial mechanism of our age generates its own justifying mythology, giving the minimalist ritual of abortion an aura of righteousness.

But, being a good "progressive", Mr. Obama doesn't know that he is simply a mouthpiece for the modern recrudescence of the primitive Sacred. Sadly, neither do millions who support him for president of the United States of America.
Posted by Athos at 5:23 AM