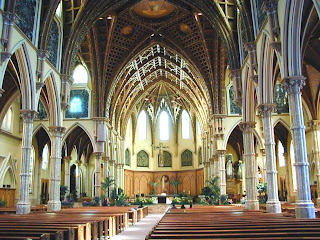 Do you remember where you were 3 years ago today? The memory of Pope John Paul II's passing will stay with my wife and I for a long time. We were at the Holy Name Cathedral in Chicago listening to a young child's baptism service when the priest informed everyone of Pope John Paul II's death. So the words of Pope Benedict XVI today ring loud and clear for me. May we take to heart the spirit of JPII and his sense of total immersion in the love of Christ that was so real for him.

MAY THE CHURCH FOLLOW TEACHINGS, EXAMPLE OF JOHN PAUL II

VATICAN CITY, 2 APR 2008 (VIS) - In St. Peter's Square at 10.30 a.m. today, Benedict XVI presided at a Eucharistic celebration to mark the third anniversary of the death of Servant of God John Paul II. Members of the College of Cardinals concelebrated with the Holy Father.

Addressing the more than 40,000 people present, the Pope in his homily returned to the hours following the news of John Paul II's death on 2 April 2005, recalling the innumerable faithful who prayed before his body and participated in the funeral.

"Among the many human and supernatural qualities" of the late Pontiff, Benedict XVI mentioned "that of an exceptional spiritual and mystical sensibility. It sufficed to watch him as he prayed: he literally immersed himself in God and, during those moments, it seemed as if everything else was foreign to him. ... The Mass - as he often said - was for him the focal point of every day and of his entire life. The 'living and holy' reality of the Eucharist gave him the spiritual energy to guide the People of God along the path of history".

After recalling how John Paul II died on the eve of the second Sunday of Easter, the Holy Father highlighted how the late Pope's pontificate, "both as a whole and in many specific moments, appears to us as a sign and testimony of Christ's resurrection. The paschal dynamism which rendered John Paul II's existence a complete response to the call of the Lord, could not be expressed without his participation in the suffering and death of the divine Master and Redeemer".

Pope Benedict pointed out that the words from the Gospel that figured in today's Mass - the "do not be afraid" addressed by the angel to the women at the empty tomb - "became, from the solemn beginnings of his Petrine ministry, a kind of motto on the lips of Pope John Paul II".

He always pronounced these words "with unbending firmness, at first while carrying his bishop's staff with its cross and later, when his physical strength was waning, almost while supporting himself on it, until that final Good Friday in which he participated in the Way of the Cross from his private chapel, holding the cross in his arms. ... That eloquent scene of human suffering and faith ... revealed to believers and to the whole world the secret of an entire Christian life".

As little by little the late Polish Pontiff "lost everything, in the end even the power of speech, his trust in Christ became increasingly evident. As it was with Jesus, so with John Paul II, in the end words gave way to the extreme sacrifice, to the gift of self. Death was the seal of an existence entirely donated to Christ, conformed to Him even in physical terms, in his suffering and faithful abandonment in the arms of the heavenly Father".

The Holy Father also reminded those present that today marks the opening of the First World Apostolic Congress on Divine Mercy, which aims to study Pope John Paul's "rich Magisterium on this subject.

"God's mercy", Pope Benedict explained, "is a good key to understanding John Paul II's pontificate. He wanted the message of God's merciful love to reach all mankind and exhorted the faithful to bear witness to it".

"Servant of God John Paul II personally knew and experienced the immense tragedies of the 20th century, and for a long time he asked himself what could stem the tide of evil. The answer could not but be in the love of God. In fact, only Divine Mercy is capable of limiting evil; only God's all-powerful love can overcome the arrogance of the wicked, and the destructive power of selfishness and hatred".

The Holy Father gave thanks to the Lord "for having given the Church this faithful and courageous servant" and to the Virgin Mary "for having incessantly watched over his person and his ministry". He also asked John Paul II "to continue to intercede from heaven for each of us, and particularly for me whom Providence has called to take up his priceless spiritual legacy.

"May the Church", Pope Benedict added in conclusion, "following his teaching and example, continue in her evangelising mission faithfully and without compromise, tirelessly spreading Christ's merciful love, source of true peace for the whole world".
Posted by David Nybakke at 2:47 PM