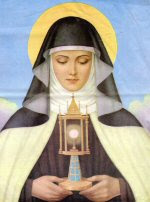 St Clare feast day - August 11
from my good friend Gerry Straub,
author of The Sun and Moon Over Assisi

A Good Catholic Girl
Clare was a good Catholic girl before she met Francis. She went to church, did good works and avoided evil. Yet, when she encountered Francis, she was introduced to something radically different from just being good. She suddenly realized that God wasn’t interested in our “just being good.” God desired far more than that…God wanted us to be so united with him that we become reflections of the divine.

Francis inspired Clare to dedicate herself to live in full accordance to the highest demands of the gospel. She put the whole gospel into her whole life. She lived for nothing but God. Her mind and heart were constantly centered in God. She entered fully into the most rigorous demands of poverty. She gave herself in charity to all. Prayer became her very breath. She lived love, and radiated with sanctity. Clare’s undying fidelity to the Lord and her vocation inspired everyone who knew her. Pope Alexander IV called Clare a “lofty candlestick of holiness.”

The light from the candlestick shimmers with one unequivocal message: God wants our all. God wants our trust, our humility, our openness, our hearts…God wants our entire beings, so his perfect love can be born again into the world.

How do I respond to that message? I must begin by renewing my commitment to God every day. I must try every day to deepen my relationship with God.

Clare calls me to ascend the ladder of contemplation.

…we must remember that young girls living in 13th-century Assisi did not have the right to determine their own future...Clare’s future was not her own. During the Middle Ages, noble women were expected to marry well and increase the family wealth. By the time she reached 18, Clare was already well past the marriageable age, and her parents were lining up suitors for her, and firmly pressing her to accept one of the many advantageous offers of marriage available to her. (Note: her parents wanted her to marry shortly after her 12th birthday, but Clare managed to get them to delay their plans.) But Clare had a much different marriage in mind - she wanted Francis to take her hand and give it to Christ. Her choice not to marry caused great turmoil and anguish in the household, and greatly disrupted the peace within the Offreduccio palazzo. It took great courage and determination for Clare to follow through on her dream to have no other spouse but Christ. First, she had to renounce her privileged position in the nobility, and, second, she had to refuse to follow the conventional monastic tradition (that was one of the few options open to women) because it too seemed to represent wealth and security.

During the Lenten season of 1212, Francis preached a series of sermons in San Giorgio and the Cathedral of San Rufino. Clare attended a number of these. Considering her love of beautiful sermons, Clare must have been thoroughly captivated by the fiery improvisations of this preacher-poet who was once known as “the king of the youth” and who was now inebriated with God’s love. She, too, felt she had to make a decision, a decision to follow Francis’ example and walk in the footsteps of Christ.

But it is important to remember it wasn’t Francis’ words that motivated Clare; what moved Clare was what she heard in her heart. Listen once again to Ingrid J. Peterson, O.S.F.:

“When Clare was influenced by Francis’ preaching, it wasn’t because his personal life was a model for her. It was not because she finally found her knight in shining armor, the man of her dreams; it was because Clare had a hunch that what Francis said about the Gospel and the poorness of Jesus is what she could put into action in her own soul. What Francis said touched Clare’s heart. In the thirteenth century, for a woman of the aristocracy to choose to live without property as a means of support was a risk, even of life itself.”

As a young girl, Clare saw the deep divisions within the community of Assisi; she was troubled by the conflict between the merchants with newly-acquired wealth and the old aristocracy, and by the ever widening chasm between the rich and the poor. Many members of the Church hierarchy, driven by a hunger for power and money, behaved so scandalously, they sparked the birth of numerous religious movements consisting of lay people who wanted to live a more Gospel-centered life that was animated by penance and a radical following of Christ and the Apostles. Clare’s sensitive soul responded to the extremes of greed and misery she witnessed by dedicating herself completely to the service of Christ’s poor. And so, the soil of Clare’s soul had been well-tilled and was ready to receive the message sown by Francis. Clare had already made a private vow of virginity and service to the poor. She was living as a penitent and was planning to give away her inheritance to the poor. The words she heard in San Rufino issuing forth from the mouth of Francis just hastened her along on her spiritual journey.

Aramis here - I highly recommend this book. Gerry surrounds his own spiritual journey with great insights of the life of Francis and Clare as well as the history of Assisi and the painter Giotto.