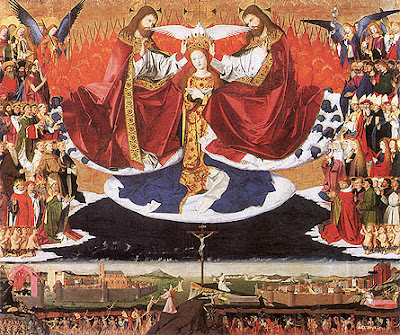 The feast of the Queenship of Mary was established in 1954 by Pope Pius XII. The original date for this feast was chosen as May 31st, but was later moved to the octave day of the feast of the Assumption, August 22nd. This memorial celebrates the same event that is highlighted by the fifth glorious mystery or the Rosary.

Throughout the New Testament, Mary's role in heaven is mentioned. Mary is alluded to as Queen in the book of Revelations, and throughout the Bible. It is because of Jesus close relationship with his mother that she shares in his kingship.

The Church and the faithful for have also referred to Mary as queen since the fourth century. Various songs, litanies, and prayers refer to Mary as queen. (e.g. Regina Caeli during Eastertide.) The Church has affirmed the title of Mary in modern times through documents including Lumen Gentium (..."and exalted by the Lord as Queen over all things, that she might be the more fully conformed to her Son" Lumen Gentium 59) and the papal encyclical Ad Coeli Reginam.

The title Queen is used to indicate the final state of the Virgin, seated beside her Son, the King of glory.

The Son whom you merited to bear alleluia

Has risen as he said alleluia

Pray for us to God alleluia

For the Lord has truly risen alleluia
Posted by David Nybakke at 6:54 AM

Thanks for the greeting and for yet another truly beautiful post to your blog.
The only birthdays that seem important to me these days are those of my children; they being the ones that changed my life, but mine comes around too, with astonishing rapidity.
I spent the day in airports and airplanes, but my wife now travels with me, so it was a fine way to spend it.
Blessings,
Gil Bailie