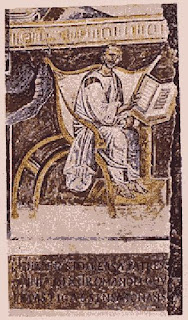 This is the oldest surviving portrait of Augustine, from the Lateran in Rome in the sixth century.
It seems to me, Aramis here, that we can either participate in the Communion of Saints and the Life in Christ or we dismiss it. I pray with the words below from Pope John Paul II, "O Saint Augustine, Communicate to us too a spark of that burning love for the Church," so that we may glow with the sure witness of Christ Love and to be His instruments drawing all souls to Him.
Reflections from Doctors of the Catholic Church on St Augustine.

Saint Augustine’s confessions is a classic of spiritual autobiography. His self-knowledge was rooted in his knowledge of Christ, so it led him beyond himself into the heights and depths of love. His brilliant mind led him to the shores of human understanding, at which point he knelt in humble acknowledgement of the transcendent mystery of God.

Augustine was blinded by the light of God and through his conversion he was able to change his love for life to a life of love for Christ and his members. He received from God a powerful, spiritual life that empowered him to shepherd God’s flock for thirty-four years by his example, sermons and brilliant writings. He protected the faith and faithful from many false errors and heresy and lead others to find the light that he looked for all his life but never really found it until he was generous with God’s graces. Had it not been for graces, his prayers and others’ prayers, and his mother's prayers, he would have never found it. It also required his persevering faith from Monica, and all those who aided him, especially St Ambrose, first Doctor of the Church, who baptized him into the faith as a young man.

The conversion of St Augustine is so dramatic because he reveals how far he strayed from the Catholic faith through his waywardness and his pride. Only by acknowledging his sinfulness, turning to prayer and listening to the Spirit urging him forward in truth, did Augustine turn to God and ask for his mercy. God never refuses to grant to anyone who will but ask seriously.

The below by Pope John Paul II who died, and who reigned from 1978 until 2005 , writes a glowing testimonial about Augustine that will greatly benefit all who will read it and take it to heart on this holy Doctor of the Church.
Saint Augustine

O great Augustine, our father and teacher,
Who knows the shining paths of God
And also the crooked paths of men,
We admired the marvels that divine grace
Has worked in you,
Making you a passionate witness
To truth and goodness
At the service of your neighbor.

At the start of a new millennium, marked by the Cross of Christ,
Teach us to read history
In the light of divine Providence.
Which guided events to the
Final encounter with the Father.
Guide us towards goals of peace.
Kindling in our hearts
Your own desire for the values
Upon which we,
With the strength that comes from God,
Can build the “city of Man.”

May the profound teaching that you drew,
With loving and patient study.
From the ever-living sources of Scripture
Enlighten all who are tempted today
By alienating mirages.

May you obtain for them the courage
To set out on the way
Towards that “inner man” in whom the One,
Who alone can restore peace
To our restless hearts, awaits.

So many of our contemporaries seem to have
Lost the hope of reaching,
Amidst the many conflicting ideologies,
The truth that they continue to yearn for
In depths of their hearts.
Teach them never to give up their quest
In the certainly that,
In the end, their efforts will be rewarded
By thy fulfilling encounter
With that supreme Truth, who is the Source
Of every created truth.

Lastly, O Saint Augustine,
Communicate to us too a spark
Of that burning love for the Church
The Catholic mother of the saints
Which sustained and gave life
To the efforts of your own long ministry.
Enable us, as we walk together under the guidance of our legitimate land
Where, with all the Blessed,
To reach the glory of the heavenly Homeland
Where, with all the blessed,
We can join in singing
The new and eternal Alleluia. Amen

The below Meditation of the Day listed today in the Magnificat comes from St Augustine himself and in it we see his gratitude for God’s grace and his insatiable thirst to share God’s profound peace.

Judgment and Mercy and Fidelity

He, you see, after the war in which “the flesh lusts against the spirit, and the spirit against the flesh, so that it is not the things you wish that you do” (Gal 5:17), is peace on earth to people of good will, because “he is our peace, who has made the two into one” (Eph 2:14). So let good will persist in standing firm against evil desires, and persist in imploring the help of God’s grace, through Jesus Christ our Lord…

Is anybody, I mean to say, in a position to have both the will and the ability, unless the one who granted us the will by calling us also helps us to have the ability by inspiring us? The fact is, his mercy gets in ahead of us every single time; to call us when we were lacking the will, and then to ensure we obtain the ability to do what we will. So let us say to him, “I have sworn and determined to keep the judgments of your justice" (Ps 119: 106). I have indeed determined and promised obedience because you have ordered it; but because “I can see another law in my members fighting back against the law of my mind, and taking me prisoner to the law of sin which is in my members” (Rom 7:23), “I have been utterly humbled, Lord; give me life according to your word” (Ps 119: 107). Look, “to will is available to me” (Rom 7: 18); therefore, “approve, Lord, the voluntary offering of my mouth” (Ps 119: 108), so that your peace may come on earth to people of good will.