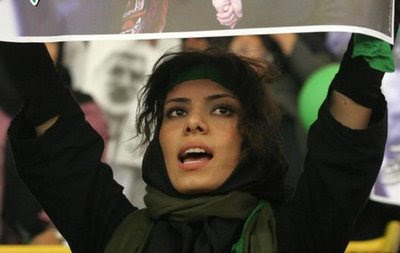 Does anyone truly understand what is happening in post-presidential election Iran? Does this explain anything?

C. S. Lewis posited for inspection his personal findings of versions of The Golden Rule in nearly all the writings of human civilization - Treat others they way you want to be treated. (Cf. The Abolition of Man)

In this way, it may be said, the Holy Spirit is not without witness in all the world, a blessed and holy seed of the Gospel that - sometimes - is only released in the fierce heat of a forest fire of tumult.

Now is such a time in Iran. Who could have foreseen it? Is President I Won right to assume a largely laissez fair attitude? Yes, I think so, bipartisan sniping and deconstruction aside. He sees what is happening; he is a politician. Grandstanding and waving the flag of democracy is cartoon-esque.

Let's see if the Holy Spirit will fan different flames than those of mere crowd contagion in Iran.
Posted by Athos at 7:26 PM