Catholic Church is the extension of Christ’s Life on earth 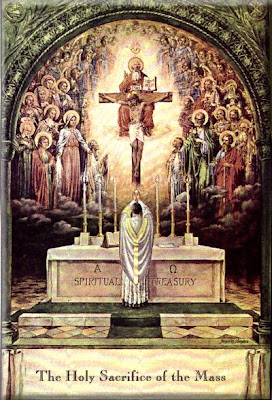 Meditation of the Day

If this Man were man only, however perfect and sublime, how is it that his sanctity appears to run by other lines than those of other saints? Other perfect men as they approached perfection were most conscious of imperfection; other saints as they were nearer God lamented their distance from him; other teachers of the spiritual life pointed always away from themselves and their shortcomings to that Eternal Law to which they too aspired.

Yet with this Man all seems reversed. He, as he stood before the world called on men to imitate him; not as others leaders have done, to avoid his sins: this Man, so far from pointing forward and up, pointed to himself as the Way to the Father; so far from adoring a Truth to which he strove, named himself its very incarnation; so far from describing a Life to which he too one day hoped to rise, bade his hearers look on himself who was their Life; so far from deploring to his friends the sins under which he labored challenged his enemies to find within him any sin at all. There is an extraordinary Self-consciousness in him that has in it nothing of “self’ as usually understood…

The Catholic Church is the extension of Christ’s Life on earth; the Catholic Church, therefore, that strange mingling of mystery and commonsense, that union of earth and heaven, of clay and fire, can alone be understood by him who accepts her as both Divine and Human, since she is nothing else but the mystical presentiment, in human terms, of him who, though the Infinite God and Eternal Creator, was found in the form of a servant, of him who, dwelling always in the Bosom of the Father, for our sakes came down from heaven.

- Monsignor Robert Hugh Benson (+ 1914) was a British convert to Catholicism who is best known for his novels about the faith.

h/t Doctors of the Catholic Church and Magnificat
Posted by David Nybakke at 10:06 AM

This meditation was masterfully done. The authors break up the text at:

"There is an extraordinary Self-consciousness in him that has in it nothing of "self" as usually understood..."

"The Catholic Church is the extension of Christ's Life on earth;..."

In my mind I had never quite put these particular pieces together nor so well as Benson does in this writing.