The Mask and The Person 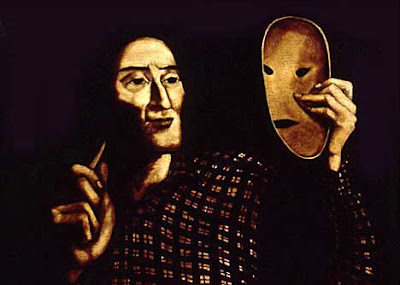 Artist Michael D. O'Brien writes: Man is a mystery to himself, cannot fully know himself except in Jesus Christ. Seeking to know himself without genuine knowledge, he wears masks, false images of himself. Sometimes he creates a new mask. At other times he examines the mask as if it were a true image of himself.

The Mask and The Person - Looking at the anthropology behind the two, Gil Bailie writes in THE SUBJECT OF GAUDIUM ET SPES RECLAIMING A CHRISTOCENTRIC ANTHROPOLOGY OF THE HUMAN PERSON:

The Greeks, for their part, used the word prosopon for the mask the actor wore on stage, and it was also via this reference to the actor wearing a mask that the Greek idea of the person first appears, suggesting, some have thought, an intriguing affinity between these two concepts: mask and person, and inspiring John Zizioulas to wonder:

. . . it is here that (by coincidence?) the term “person” (prosopon) appears in ancient Greek usage. . . . But how and why did this meaning come to be identified so quickly with the mask (prosopeion) which was used in the theater? What connection does the actor’s mask have with the human person?

“It is precisely in the theater that man strives to become a ‘person’”, writes Zizioulas. In “speaking through” the mask of another, the actor dispossesses himself of his “own self” in order to be possessed by the other. “I live, now no longer I, but … Persephone or Creon or Iphigenia lives (temporarily) in me.” As a result of his mask, says Zizioulas:

. . . the actor, but properly also the spectator – has acquired a certain taste of freedom, a certain specific ‘hypostasis,’ a certain identity, which the rational and moral harmony of the world in which he lives denies him. . . . as a result of the mask he has become a person, albeit for a brief period, and has learned what it is to exist as a free, unique and unrepeatable entity.

Of course, the hypostasis the actor is able to briefly experience figured decisively in the development of both the doctrine of the Trinity and the doctrine of the divinity of Christ. The fourth century controversies which led to these doctrines were finally resolved by what Zizioulas calls “a philosophical landmark, a revolution in Greek philosophy,” a revolution which consisted of recognizing the hypostatic underpinnings of the persona. In pondering the mystery of the Christ, the early Council fathers – anticipating a 20th century Council’s insistence that “only in the mystery of the incarnate Word does the mystery of man take on light” – were compelled by the mystery of the incarnate Word to discover the hypostatic mystery of personhood itself, a discovery which, in the words of Dennis Edwards, “gave a radically new weight to the idea of person.” “The revolution of the person,” writes Paul Evdokimov, “is the event of Christianity,” and human desire is simply “the inborn nostalgia to become a ‘person’.”

See our sidebar for the link to this important document by Gil Bailie.
Posted by David Nybakke at 2:18 PM