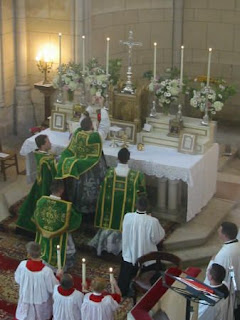 Amy Welborn @ Charlotte was Both has a couple posts on the picture above. May I suggest you take a look them.

The first post, Necessary Conversations started a chain reaction in the blog world, which she mentions in this post, What a picture is worth..., where I found the comments at Thrown Back particularly interesting. Anyone here have any comments?

1) Romulus, who wrote of the picture:

I see a man offering a sacrifice. The man has a cross on his back.

As I’ve said before, my big ah-ha moment over the past couple of years has been the realization that most of us - myself included - have been formed to think of the Mass as a prayer meeting. A highly structured prayer meeting, but a prayer meeting nonetheless, one which emphasizes community and who we are in the here and now, a prayer meeting which should somehow be expressive of who we are as individuals and a community.

Prayer meetings are good. But that’s not what the Mass is.
Posted by David Nybakke at 5:23 PM

Here's a nice comment I found at Spirit Daily, listed as "he was praying with the people"

Another noteworthy observation, or series of observations, from Fr. Rob Johansen, "A Necessary Conversation" About Ideologized Liturgy [via Mark Shea].