Saint of the Day - Saint Lawrence of Brindisi - a Capuchin Friar 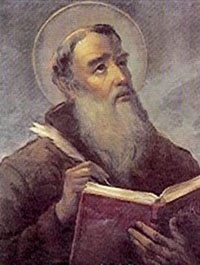 Cesare de Rossi was born at Brindisi in the Kingdom of Naples on July 22, 1559 into a Venetian family of a good social level. When sixteen, he entered the Capuchins, taking the name Lawrence. After studies in Verona, he was ordained and began to preach with great effect in Northern Italy. In 1596 he went to Rome as General of his Order, a position he would hold five times.

At the request of Emperor Rudolf II, who knew the reputation of the Capuchin, Pope Clement VIII sent Fr. Lawrence to Germany to help raise a crusade against the Turks. At that time, Mohamed III, the sultan of Constantinople, was advancing beyond the Danube with the aim of invading Hungary and Austria, thus opening the way to enter Italy. He bragged he would transform the altar of St. Peter Basilica into a manger to feed the Turkish horses. 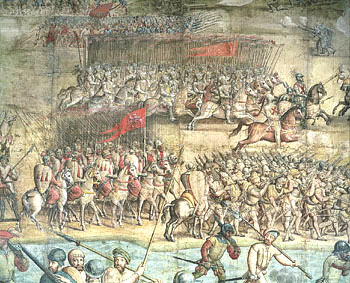 On the day of battle, the Catholic General had only 18,000 men before the 80,000-strong army of the Turkish Sultan. Faced with this great disparity in numbers, the secondary commanders advised prudence and counseled the Archduke to withdraw. Archduke Matthias sent for Fr. Lawrence to ask his recommendation. The Capuchin advised attack, and for a second time, he assured a complete victory for the Catholic forces. His ardent faith wiped away the fear of the commanders. The decision was made to give battle, and the soldiers took their positions. Mounted, Lawrence addressed the troops and spoke with such vigor that the troops took the initiative and drove forward to attack the Turks with an incredible force.

READ the rest of the story HERE.

Of course many sources today will not even mention the battle with the Turks only telling of the saint's 'peaceful' qualities: like this: "Lawrence was appointed papal emissary and peacemaker, a job which took him to a number of foreign countries." I ask, would he have had the opportunity to be a peacemaker if he had not helped in the battle of Stuhlweissenburg?

Read the fuller legacy of Saint Lawrence HERE. With St. Anthony, St. Bonaventure, and Blessed John Duns Scotus, he is a Doctor of the Franciscan Order.

The known writings of St. Lorenzo of Brindisi comprise eight volumes of sermons, two didactic treatises on oratory, a commentary on Genesis, another on Ezechiel, and three volumes of religious polemics. Most of his sermons are written in Italian, the other works being in Latin. The three volumes of controversies have notes in Greek and Hebrew.
Posted by David Nybakke at 10:41 AM